Kopitar: “It’s not going to change my mindset” 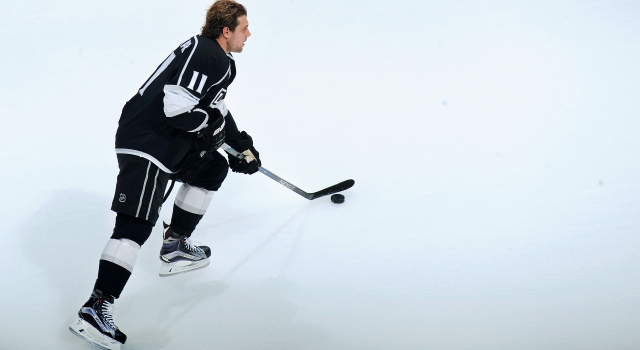 Anze Kopitar met with the media under some circumstances that were ideal (hello, $80 million) and some that weren’t (the Kings had blown a two-goal third period lead in a 5-3 loss to the Senators). In his voice, the frustration and wear over a missed opportunity on Sunday was apparent, though there were also pangs of relief that the extended contract negotiations are now in his rearview mirror.

Kopitar, on whether he had any doubts about both sides agreeing to the contract:
You know, I didn’t really have any doubts. I guess I didn’t know but I guessed it was going to get done and I was leaning towards getting it done than doubting it. So I never really thought that far.

Kopitar, on whether he was frustrated by the length of negotiations:
Well I’ve said it before, I’d have liked it to be done before the season so that it would have been behind me but, again, I realize it’s a business, it’s a process and when two parties collide like that it can go a little longer than, you know, just longer I guess. And then, this one was a bit longer and it’s done now and I’m very happy about it.

Kopitar, on whether the amount of money he wanted from the contract was fulfilled:
Yeah, it was fulfilled. [Reporter: Was there a ballpark that you were looking for particularly before the negotiations started?] Yeah, you always have a plan going in. So we stuck to the plan obviously and I’m very satisfied with what I end up with. [Reporter: Not just the money but the length?] The length, yeah.

Kopitar, on his contract potentially making him a King for his entire career:
Yeah, I’ve expressed that before too that I’d like to stay here for a longer period of time and eight years being max, we certainly accomplished that.

Kopitar, on Los Angeles keeping its core players together:
Everybody, I think obviously Drew is coming up, but there is everybody else that is still somewhat locked up and it’s definitely nice to know that a lot of guys are staying here for an extended period of time. And again, I’m happy to sign knowing that I am going to stay here for a little while longer.

Kopitar, on aspects of the organization that made him want to commit for eight years:
Well, I’ve been a part of this organization I guess when we went through pretty big struggles and not very fun years when we played. We turned that around and obviously the last few years have been pretty exciting for everybody. I mean obviously last year was not the year that we wanted but we were still right there in the mix. So knowing that we have a winning team here, that’s what makes you want to stay here an extended period of time.

Kopitar, on whether he has peace of mind about planning his future now:
Well yeah, it’s definitely nice knowing that the eight years are planned ahead and just yeah, somewhat planned. You never know what’s going to happen, but in a perfect world if everything goes according to my plan and the team’s plan then that sense of security is very nice.

Kopitar, on the loss to Ottawa:
Very uncharacteristic of us, letting a two-goal lead … we blew that one in a matter of minutes. And then the power play goal they scored put them over the edge. So we definitely can’t be as sloppy as we were tonight.