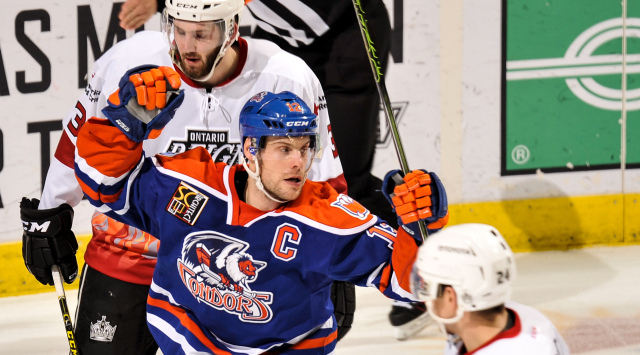 Reign game breakdown
The Reign (20-10-2-1) lost game No. 2 of their weekend back-to-back-to-back in a 4-2 loss to the Bakersfield Condors on Saturday night. A lackluster start the day following a strong 5-0 win over San Diego, the Reign found themselves trailing the Condors 2-0 after the first period on goals by Tyler Pitlick, his first off a faceoff, and Joshua Winquist, a power play blast that just trickled through goalie Peter Budaj. From there it was an uphill battle for the Reign, who despite two goals by Nic Dowd, chased the Condors (15-14-2-2) the rest of the night. The key came down to a shorthanded goal allowed in the third period by Rob Klinkhammer that put the Condors up 3-1. Dowd scored a power play goal shortly after but an empty-netter by Andrew Miller with 9 seconds left on the clock ultimately ended the Reign’s comeback try.

Best quote
Reign head coach Mike Stothers, on the difference in the game: “A brutal first period. We picked it up, but again you’re coming from behind and ultimately the game was decided on a shorthanded goal. So, that’s kick in the backside.”

Three stars
–Nic Dowd – The Reign center scored his 6th and 7th goals of the season and now has eight points in his last five games. His play was the bright spot in an otherwise not-so-memorable game for his team. Dowd also saw time again centering Michael Mersch, who joined the Reign on Friday after being sent down from the Kings. Both of Dowd’s goals came off rebounds, the first from a point shot by Kevin Raine that went off the crossbar and right to Dowd’s stick for an easy tap. That one got the Reign back in the game at the 14:22 mark of the second trailing 2-1. His second goal came after Klinkhammer’s shorty and at least gave the Reign a chance to tie things up with Budaj pulled late. It was another rebound goal, but this time a shot by Kevin Gravel went off Mersch, leaving Dowd with a gaping net to backhand the puck into.
–Rob Klinkhammer – The Condors left winger showed his NHL experience with a heads-up read on a board play on the penalty kill (more on that coming up) which set up his own shorthanded goal that was a dagger in the Reign’s comeback attempt. It was also his first goal of the season with the Condors after playing in 13 games up top with the Oilers.
–Laurent Brossoit – The Bakersfield goalie didn’t play in last weekend’s 4-0 win over the Reign, but picked up where Eetu Laurikainen left off and was solid here nonetheless in his sixth start in the Condors’ last seven games. He stopped 29 of 31 shots he faced to pick up his 11th win of the season.

Turning point
If the Reign are going to go back and look at one goal being the difference, it will be the shorthanded one scored by Klinkhammer at the 7:20 mark of the third. Adrian Kempe had the puck along the near boards in the offensive zone and tried to pass it up the wall to Sean Backman, but instead it was intercepted by Klinkhammer who made a move around Backman and was off to the races on a 2 on 1 toward Budaj. Klinkhammer opted to shoot from the left circle, beating Budaj for his first goal of the season.

Stat fact
–30 – Games already played by Budaj, who started his 19th straight contest. The All-Star selection had 25 saves in the loss and came off the ice rushing to the locker room and shaking his head.

This and that off-ice
The Reign wore hot rod-themed jerseys with flames and all, which were auctioned off after the game to benefit American Red Cross Inland Empire. … The Reign will get Kurtis MacDermid back in a week. The defenseman served his ninth game of his 12-game suspension for a check to the head of the Gulls’ Matt Bailey. He’s eligible to return next Saturday at San Jose.

Next up
The Reign’s weekend three-in-three will come to a conclusion on Sunday at 3 p.m. when they host Texas. Ontario is 2-0 against the Dallas Stars affiliate this season with both victories coming in overtime.