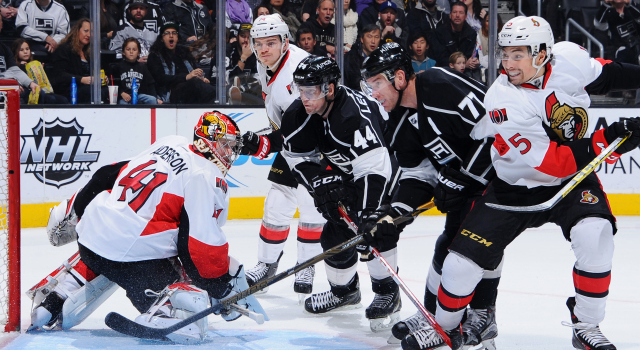 On surrendering the lead in the third period:
I think we had our chances throughout the game to go up two, three goals and we just didn’t capitalize on our chances.

On what he feels may be the reason for the loss:
You just have to forget about it. There’s no need to think about it anymore than what we just played. Get it out of our head. We’ve got a big game tomorrow against Anaheim, division rival. We haven’t played them yet. We’ve got to be ready to play against a big, strong team and it’s a huge game for us.

On what they have to focus on against Anaheim:
Come out strong and just play a full 60 minutes. I think we really started well the first two periods and, like I said, we had our chances to go up and put them away pretty early in the game but we just didn’t do that.

On his goal in the third period:
It was just a good breakout and something that Looch does often, just go back post. But like I said, throughout the game we had our chances. Our line especially, we had a ton of chances in the second to kind of go up by a couple and really put it away and we just couldn’t figure it out.