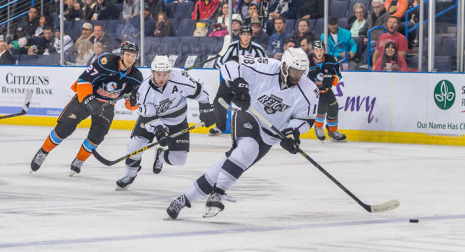 Reign head coach Mike Stothers, on the game overall:
I thought it was a good game. I thought we played extremely well. I thought we utilized some of our best assets which is skating, and puck possession and we did a good job. Plus, we for once we were disciplined and we kept them to four power plays against San Diego. I’d like to see that against everybody. Four is the maximum penalties you want to take. When you do that you have a chance.

Stothers, on beating the rival Gulls:
It’s just good to win. … It doesn’t matter who’s wearing the opponent’s jersey we just approach every game that we want to win. We won a game in a big weekend for us. We’ve already put that aside. We’re starting to get ready for tomorrow against Bakersfield.

Stothers, on role players like Crescenzi and Samuels-Thomas:
It’s pretty amazing how it works when you get Kempe back and Mersch back and you can kind of get some balance throughout your lines. Guys are slotted in the areas that they need to be or should be to utilize their assets. I thought tonight we were fortunate enough with the return of Big Mike, that the four lines we had dressed tonight were quite capable of playing against anybody. That makes a big difference. We were able to use our whole bench. We didn’t fatigue ourselves by killing penalties. And, I think the results were what you saw. We had good balance throughout our lineup tonight and it makes a huge, huge difference and it’s going to be very important because of the number of games we’re playing this weekend.

Michael Mersch, on getting back with the Reign:
It was great. We had a great win. We’ve had some battles against that team. They’ve beat us four straight times so it was good to get this one. I worked on some things personally … Congrats to Army on his first pro goal. Really happy for him, team’s really happy for him, got the game puck after. Overall it was a great win.

Mersch, on the NHL vs. the AHL:
The pace of the NHL level is the best pace in the world so just little stuff like that. Little more time on the walls on breakouts and stuff. Was able to make some good plays to Backs and get him and Army going with speed. Little stuff like that.

Mersch, on what he sees differently in the team since coming back:
I think the young guys, it takes time to develop. Brodz and Kempe and Z, those guys are holding onto the puck a little bit longer, making some good plays that we knew they could make all along. So, they’re doing that type of stuff and it’s helping our team out and it makes our lineup deeper and stronger. It’s exciting to watch from the start of the season to now.

Mersch, on if he expects to get back up around the trade deadline:
That’s funny. I guess you know more than me. I just play, try to get better along the way and help whichever team win because there’s two good teams here. We’re in first place in our division down here and they’re first in their division up there. It says a lot about the organization and when you can help a team win and be a part of that it’s something special. [Reporter: But plane rides are better than bus rides?] Yeah, obviously. It’s a little bit different but I’m used to riding the bus. It’s fun with the guys on our team, we have a close group of guys.

Vincent LoVerde, on the importance of the win:
At the end of the day we’re just focusing on our game, coming out with a good push and good effort from all four lines and all four D pairings. It was obviously good to get the win and a good start to the weekend.

LoVerde, on how he felt on the ice:
My legs felt good. Some days just feel better than others. Today was one of those days, it felt good. My D partner Les did a good job helping me out, backing me up. We’ve been playing together now for about eight games or so, getting more and more comfortable with each other.

Derek Army, on his first goal:
We got it in deep on the power play and made a nice play winning a battle and Augs was right in front, parked right in front. I know coach wants us to get right to the net so I try to get to the net. Great shot from the point, I think it was Vin, Dowder was trailing too, and Augs with a great tip and it just kind of laid there. An easy one to tap in but that’s all because of the guys working hard and getting pucks to the net.

Army, on his goal being a difference-maker for the power play:
It’s kind of a momentum boost, especially going into the next period. Sometimes you find some tough sledding. It didn’t go our way, I thought we had a couple chances it just didn’t go and it was good to end the period with a goal on the power play and we followed it up … building from that.

Army, on where his goal puck is and what he’ll do with it:
It’s right in my stall. My grandfather, I give all my pucks to him and my dad. I’ll probably give it to my dad or mom or grandfather, whoever I see first. They’ll be excited.

Peter Budaj, on the win against a rival:
You build a little bit of a rivalry, we play them a lot of times and they have a really strong team, play really hard. They had a great push in the second and third period at the end there. We just stuck with it and played really hard and were able to get two points which is huge, especially against a division rival.

Budaj, on the shutout:
A win is a win. The shutout feels great, not going to lie to you about that, it feels great, but I think the team did a great job. They had a power play at the end and the guys blocked shots and we actually end up scoring a shorthanded goal. We kept going at them. Guys really helped me out to get this one. It was nice to see because it was already 4-0, minute left in the game and guys really battled hard in front of me so it’s a great team effort.

Budaj, on the three games in three days and if he’s been told he’ll start all of them:
He hasn’t told me anything yet. Just going to take it one game at a time. We won tonight, enjoy it a little bit and go back to work. It’s a tough weekend. … We’ve got to get ready and whatever he tells me I’m going to do and that’s what’s going to happen. [Reporter: When was the last time you played three in three?] I’m too old to remember.

Paul Bissonnette, on if he was surprised that there was only one fight:
Yeah, apparently their bus got here really late and it was just kind of a weird start for them. That’s what a few of their guys were saying on the ice. I just think it kind of threw them off and we got the jump on them early. I don’t know if that had a factor, a few of them mentioned it, that’s why I just say they were thrown off. It seemed like it upset them and rattled them enough to distract them. We’re thankful for the win.

Jordan Samuels-Thomas, on his breakout game:
I’ve been closer the last few 3-4 games but before that I was struggling. I’ve been closer back to my game. It was good to get rewarded and just continuing to do what I do. Just being big and strong and winning all my battles. If I’m doing that and I’m winning the 50-50 battles good things happen.

Samuels-Thomas, on the win:
I think it’s really important for us to bounce back from last game, first of all. And then obviously a win against this team. Hats off to them because they battle us hard every single night each time we play them. It was definitely important for us to get this win, especially with it being the first of a three in three.

Samuels-Thomas, on scoring again after playing a few solid games without scoring:
It’s tough when you feel like you’re playing well for a few games, but at the same time there was a week or two stretch where I wasn’t playing my game. Work with the coaches and they helped steer me back in the right direction, let me know what I do best and I’ve been sticking to it and obviously it’s good to get rewarded. Getting a tip goal because that’s a hard goal. It’s not like a tap in, it’s something you’ve got to battle for. That’s my game, battling and winning 50-50 pucks. Scoring like that is important because I think that’s what I bring to the team.