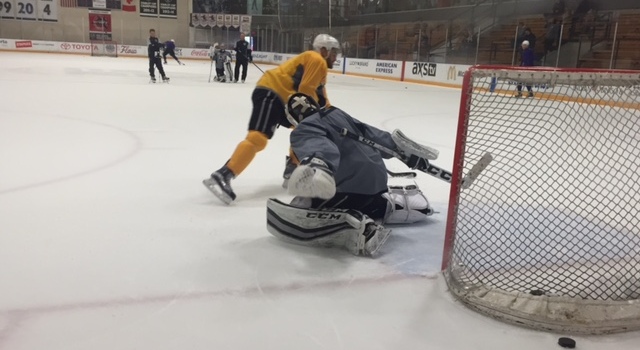 Good afternoon from El Segundo. The Kings practiced at 11:00 a.m. today – one hour later than expected – in advance of their game Saturday against Ottawa (1:00 p.m. / FOX Sports West / KABC 790 / I Heart Radio). Because tomorrow’s game is a matinee, the #LAKingsGoalieTweetOff applies, as do today’s line rushes.

-Speaking of the Tweet Off, it produced no clear results as both Jonathan Quick and Jhonas Enroth left the ice at relatively the same time. Normally we’d defer to Quick in this situation, but tomorrow’s game is part of a back-to-back set that continues Sunday in Anaheim, so there’s a raised chance of the goalies splitting time in the crease this weekend. Wait until warm-ups to see who leads the Kings onto the ice against the Senators.

-Other than Mersch’s departure, there were no changes in lines at practice from those shown Wednesday. The groups were Lucic-Kopitar-Toffoli, King-Carter-Pearson, Lewis-Lecavalier-Gaborik and Andreoff-Shore-Brown-Nolan. Kyle Clifford skated and took shots on net for a good 30 minutes before the start of practice.

-I don’t have anything new on the Anze Kopitar contract front, but thanks for asking! As learned from a Kings hockey operations source yesterday, I’m still expecting the contract to be finalized today. More on this, obviously, as it comes. Until then, be on the lookout for some interesting Darryl Sutter observations of Vincent Lecavalier as well as a Drew Doughty take on who he’d like to see as a teammate should his All-Star squad be affected by the news below.

What does trade to Montreal mean for John Scott and the #NHL All-Star Game? https://t.co/xGFawyQUns via @YahooSports