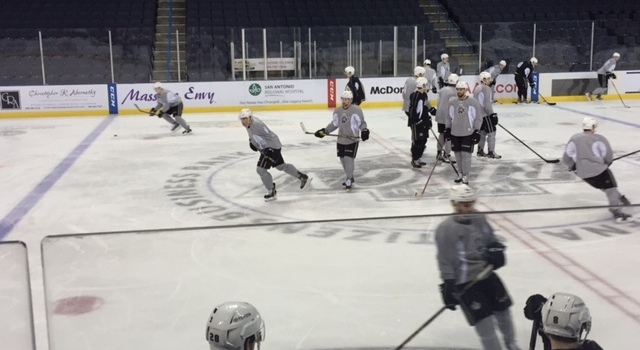 Some notes from today’s morning skate ahead of tonight’s 7 p.m. game for the Reign against the San Diego Gulls.

–The biggest news of the morning was of course the return of left winger Michael Mersch to the Reign. Mersch, who missed 12 Reign games during his call-up with the Kings, will start the game skating on the left side with center Derek Army and right wing Sean Backman. Mersch played the first 19 games of the season with the Reign alongside center Nic Dowd, so this will be another change for him to adjust to, but he’s welcoming it. “I think that when you have a new linemate and you don’t really know anything about him it’s kind of a fresh start,” Mersch said of Army. “I guess we’ll figure more out tonight but looking forward to it. I played with Backs a lot last year. He’s a shooter as well as I am. He’s a good player and he’s been having a great down here.”

–With the above forward line expected to start together, tonight we’ll also get a look at the new line of LW Adrian Kempe, C Nic Dowd and RW Jonny Brodzinski. Reign head coach Mike Stothers didn’t change his game plan of that line staying together when the word came that Mersch would be back. “I’ve just really liked Kempe on the left side with Dowder this week. … There seems to something Kempe and Brodz, they seem to like playing together and Dowder’s just so good, he can play with anybody,” Stothers said. “He should make them better, they should make him better. In fairness to Army, he’s done a real admirable job for us. But thinking we get a real experienced guy like Merschy, an experienced guy like Backs on either side of him kind of helps him a little bit. I’m not sure he’s familiar with this rivalry that we have with San Diego. So rather than have him out there being wide-eyed and wondering what’s going on, I think we can get those two guys on either side of him and I think that should help.” For Dowd, he was battling a bit of an illness last week did get some extra recovery time this week. Now, he said he’s feeling much better, so that top line will be expected to produce tonight. “A lot of speed and a lot of shots,” said Dowd, when asked what we can be expected to see from that combo. “Our main focus is going to be getting pucks to the net and creating offensive zone time and hopefully good things will happen from there.”

–The Reign have lost their last four meetings against San Diego. Their last win over the Gulls was a 4-1 win on Nov. 5 of last year. “Other than us, they don’t really have anyone else’s number,” Paul Bissonnette said. “It’s kind of frustrating. We went over it today in things that we need to do because we did beat them 4-1 in here and I think it was one of our better, full games of the season. So we just kind of watch clips on that and how we got that result — winning the little battles, being on the right side of the puck, being the aggressor.” This is the first meeting between the two teams since Dec. 26, 2015 when Reign defenseman Kurtis MacDermid’s check to the head of Matt Bailey forced him to suffer multiple facial/jaw fractures and later resulted in MacDermid being suspended 12 games. Both MacDermid and Bailey will be out of the lineups tonight, but there’s always the potential for carry over. “It should probably heat up tonight after last game,” said Bissonnette, who when called upon plays the enforcer role. “I’m not sure what’s going to go on but we’ll be ready to answer the bell if that’s the case.” Stothers opted to play down the rivalry a bit, but there has been bad blood between the Kings and Ducks affiliates. “I don’t know if it’s as big as you guys all make it out to be. To us, it’s not like we circle all our matchups against San Diego,” Stothers said. “It’s another team, it’s another game. We approach them all the same. We go out expecting to win. Anything less, we’re disappointed. They’re coming into our house. We don’t like to lose. They don’t like to lose. It’s close proximity I guess. I think if you get too caught up in the hype, you start losing focus of what you should be thinking about and that’s how you play the game. Usually if you’re thinking too much, it means you’re not moving your feet. We’re a way better team when we’re moving our feet. All I ask our guys is skate. Skate, skate, skate.”

–Goalie Peter Budaj was the first off the ice and if he starts as expected, will make his 18th straight start.