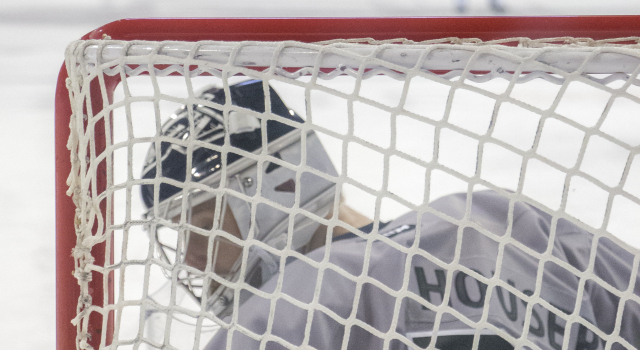 Fourteen games have passed since that December date in which goalie Michael Houser was called up to the Reign from the Manchester Monarchs after Ray Emery was released.
Fourteen games and have come gone and Houser has yet to see a start behind the team’s consummate MVP in veteran Peter Budaj.

But at some point, something, sometime, is going give for the 23-year-old Houser.

And this weekend the Reign are looking at a back-to-back-to-back at home, starting with a 7 p.m. game on Friday against San Diego. As the games go on the start times get earlier. Saturday the Reign face Bakersfield at 6 p.m. and finally on Sunday wrap things up with a 3 p.m. game against Texas.

So, will Houser get his chance?

“We’re going to just approach this as one game at a time and see how it goes,” said Reign head coach Mike Stothers said, later adding, “I don’t map out the schedule with them. I just figure we’ll wait till it’s his turn and then he’ll get the nod when it’s his turn.”

This weekend for Houser had to be circled a bit because of the schedule. Houser said Wednesday that he is indeed hopeful, hopeful that this heavy weekend slate will work in his favor.

“Hopeful, yeah. I’m always hopeful that I get in there sooner or later,” said Houser, who went 8-3 in 11 games with the Monarchs before the call-up. “It’s obviously Stuttsy’s call and whatever he says I’m going to go with. It’s hard to complain with how well Buds is playing.

“It’s not like I can go in there whining or complaining because he’s been doing so well. If I get in, great, obviously that’s what I want. If not, just come, keep working hard.”

There have been six back-to-backs for Ontario during this 14-game stretch in which Houser has been with the team, but Stothers has continued to ride the hot hand in Budaj.

You can’t blame the head coach. Budaj’s stats are almost all tops in the league and he was recently selected to represent the Pacific Division at the upcoming AHL All-Star Classic.

But Budaj’s success has meant a lot of bench time and practice time for his backup. Houser said he’s found positives in refining his game with goaltending development coach Dusty Imoo. Small parts of his game like glove positioning and footwork have been points of emphasis.

“When you’re not playing as much you have to kind of treat practices like a game, so that’s the way I’ve been treating it lately,” Houser said. “You take a few drills out of the practice like the rush drills, more game situations and you treat those like the games.

“I don’t want to give up any goals in those drills and I’ve been through this before where I haven’t gotten a lot of playing time, so it’s not my first time, and that’s been the best approach to it.”

That approach along with some extra factors have helped Houser stay mentally sound in his opinion. He’s had time on the bench during games to evaluate how the Reign defensemen operate. And it surely doesn’t hurt to get the chance to learn a thing or two from Budaj, who has nine seasons of NHL experience under his belt.

“He’s really vocal with me in the locker room and we bounce ideas off each other all the time,” Houser said of Budaj. “He’s been great.”

Assuming Budaj gets the call again Friday, it will be his 18th straight start. By contrast, the last time Houser played in a game was back on Nov. 27 of last year, a 6-5 shootout win for the Monarchs over Norfolk.

But if any weekend could be the weekend, it seems like it’s this one. Finally for Houser, maybe some good karma, positivity and an unforgiving schedule will combine to give him the chance he’s been waiting for.

“If whenever it does I’ll be ready for it,” he said. “Until then I just want to make sure I’m not pouting and staying positive because I think the coaches see that. It does rub off on guys when they start getting down on themselves about not playing or whatever it is. That’s the main thing, just make sure I don’t complain or pout around the locker room and make sure I work hard because if I’m not working hard I’m not making anyone else better.”