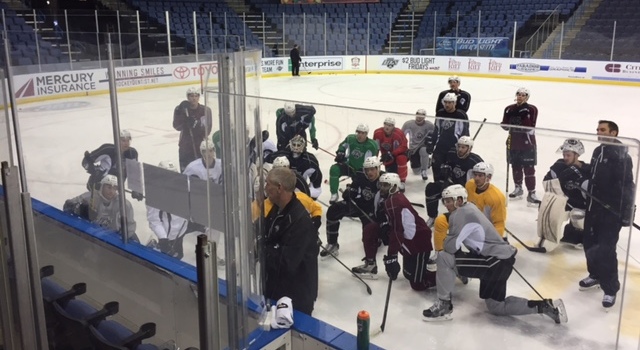 Some notes from today’s Reign practice from Citizens Business Bank Arena in Ontario.

–The biggest observation of the day was Adrian Kempe’s move to left wing on the line of Nic Dowd and Jonny Brodzinski. That spot was most recently held by Justin Auger, a right-handed shot. Head coach Mike Stothers said there were two reasons behind the move and Kempe being a left-handed shot was one of them. For the better part of the beginning of the season Dowd had left-handed Michael Mersch on his left, so Stothers pointed at that fact in perhaps making life a bit easier for the center. “It’s easier to throw it over to the left side,” Stothers said. “See if we can’t get something going there with those guys. So, that’s about as simple as it is. See if it works. We didn’t score last game so you’ve got to try something.” Not scoring the last game refers to last Saturday’s 4-0 loss at Bakersfield, something the Reign will look to fix when they host San Diego on Friday. It was debated by Stothers and the coaching staff if they would actually move Kempe to center at some point after he returned from World Juniors but, left wing it is. Kempe told me Wednesday that he prefers to play on the wing anyway since that’s where he’s been the majority of his pro career. “I played with Dowder couple games before, I know Brodz, we live together and we know each other really good too,” Kempe said. “Felt really good in practice out there today and two days ago too. I think we have really good chemistry and it’s going to be good.” This week it was also intended to get Kempe some rest time since he just got back from World Juniors last week and had to jump right into the lineup for games. Kempe was given a recovery day on Tuesday, practiced today — Stothers about Kempe’s practice: “I thought he looked unreal. He was flying. He looks good.” — and will get a maintenance day on Thursday. One goal for Stothers here in giving one of his biggest players a break: “Hopefully he will have endless and boundless energy on Friday, Saturday, Sunday.” Kempe said Tuesday’s day off was “important,” for his recovery and that he used it to sleep and get some good meals in. After playing in Finland, he feels like he’s getting adjusted back to the time change. “I’m always a little tired before I go to bed but when I’m on the ice I’m preparing good before practice and feel good so far,” Kempe said.

–Veteran center Kris Newbury is still not practicing due to what’s been categorized as a “mid-range” injury. Last week Newbury said he hoped he’d be back on the ice this week, but Stothers put things into perspective on Wednesday. “That’s not going to happen,” Stothers said. “We’re not dealing in days, we’re still dealing in weeks. Take that for what it’s worth.” In other injury news, defenseman Nick Ebert remains out. He missed practices and games last week with what he said was an upper-body injury. At first, the injury looked to be minor, as Stothers said Ebert was out just for maintenance last Wednesday. But then Ebert missed Thursday practice and then Saturday-Sunday games. Now, it’s looking more long term. “That one kind of caught us by surprise. It was more than we thought it was. He’s going to be out a while too,” Stothers said. That leaves the Reign with six defenseman since they are already without the suspended Kurtis MacDermid for another five games, which leads us into the next note.

–Kings prospect, defenseman Alex Lintuniemi (left wrist) participated in full drills, but continues to wear a red no contact jersey. Stothers said he’s been practicing the last few days with the team for the first time since his surgery in early December. Prior to that, Lintuniemi was mostly doing stickhandling and skating work outside of the team drills. “He’s still wearing red, which usually means some kind of caution,” Stothers said. “We’re close with Linti, maybe if we got into a pinch this weekend we could maybe push it up a little bit. But, I think he’s better suited for maybe another week, then I think everything will be good.” Stothers said that he’d prefer not to have to put Lintuniemi into duty this weekend, but added that it could be an option if the team was in an injury situation. “He can and should be able to do it from a health standpoint. It’s not something we would ever risk him further injury,” Stothers said. Lintuniemi started the season with the Manchester Monarchs and isn’t listed with the Reign, but has been in Ontario as part of the rehab process.

–The Kings development staff was in Ontario on Tuesday and Wednesday for “development days,” which led to a shorter than normal regular Reign practice on Wednesday.