Despite early “distraction,” Kopitar not burdened by process 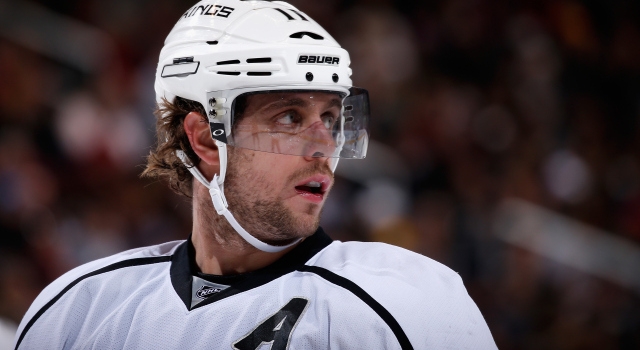 This appears to be the week that Los Angeles Kings fans have been waiting for as star center Anze Kopitar is on the verge of signing the lucrative, eight-year contract extension that he has been eligible to sign since July 1. A report by TSN’s Bob McKenzie earlier today placed the average annual value of the contract at $10-million.

Nothing that “things are moving along,” Kopitar was asked whether the finish line is finally in sight after an extended negotiating period.

“I don’t know where the finish line is,” he said. “We’ll see how quick we move, but things are moving.”

Nothing has been finalized as of this point, and Kopitar continues to receive regular updates from his agent, Pat Brisson of CAA Sports.

“Oh, we talk all the time,” Kopitar said. “Obviously it’s one of those things really where he’s got to keep me posted on what’s going on on his side, I have to keep him posted, and only that way you can really go into this and pretty much any other negotiation. If me and Pat are on the same page with everything that’s going on, there’s no uncertainty.”

Interestingly, Kopitar said that opening the season with the burden of contract negotiations hanging over his head was a newfound feeling he hadn’t really experienced as a pro.

“[At] the start, I didn’t experience that before with my first contract, so it was a little bit easier the first time around and then this time, it is what it is,” said Kopitar, who signed a seven-year, $47.6-million contract in October, 2008. “It was too much of a distraction for me. I don’t know if I showed it or not. I don’t think that was the biggest part of my start this year too. I wouldn’t say that’s what it was, but it’s always there, people are always talking about it, people are asking about it and as much as you want to forget about it, you’re constantly reminded of it so it’s a little hard, but then after that I realized it’s not going to do me any good just to worry about the stuff and I literally did put it away and not worry about it.”

Anze Kopitar, on whether he’s constantly reminded of his negotiations:
I mean, you guys know how Twitter works now and everybody is constantly tweeting at you and messaging you and everything. Part of it is that, yeah, part of it is just your buddies, your closest buddies wanting to know what’s going on and when the news is going to come out and it’s constant reminders all the time so it wears down on you, but it’s easier to tell your buddies to wait and I’ll tell them when it’s all said and done. With the difference of the Twitter world it’s a lot different.

Kopitar, on the level of communication between him and Pat Brisson:
Between me and Pat there’s definitely a two-way street. Obviously, agents in general are trying to protect players, which I get totally, but at the same time I’ve definitely have expressed my thoughts and everything so he knows what I think. Again, we’ve been on the same page right from the get-go. There was never a question about that where he was pushing more or I was pushing. We were always on the same page. To answer your question again, it’s a two-way street and I certainly wanted everything to know what was on his mind and I let everything out that was on my mind.

Kopitar, on whether he had doubts the contract would be finalized:
No, not really. I don’t think if maybe that was a little bit too naïve thinking of that but I always thought someday, somehow everything was going to turn around and go for the better, so I never really thought about this not getting done.