A few updates on the Kopitar contract talks, via reports 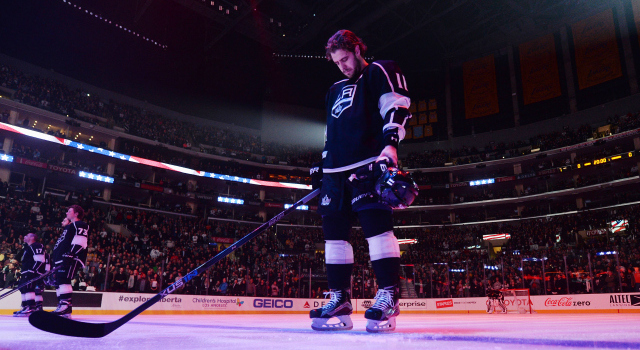 Anze Kopitar’s four-point effort against Detroit on Monday night served as a prelude to several Tuesday reports that updated the state of his contract negotiations with the Los Angeles Kings.

16. Weird Stuff I: Anze Kopitar looked brilliant with a four-point night against the Red Wings, but we still don’t have a signed contract. We all think it’s coming.

It sure seemed like he thought it was coming when the Kings came through Toronto in December. It’s one of the stranger negotiations I’ve covered, because everything points to it happening but we’re not there. Now, the conspiracy theories are coming. “Is there a problem we’re not aware of?” “Are they at an impasse?”

Teams are having their scouting meetings now, and one exec asked if he should actually plan for the possibility Kopitar hits the market.

There are other Kings bits in Friedman’s column, which includes a few notes about other players the Kings were considering before pulling the trigger on Vincent Lecavalier and Luke Schenn. One interesting note: Los Angeles was kicking the tires on free agent center Scott Gomez, according to Friedman, but preferred Lecavalier’s size.

The other update is from Darren Dreger, who spoke with Mike Richards (not that Mike Richards) of TSN 1050 Toronto to weigh in on several topics, including the Kopitar negotiations. He called it “beyond the point of bizarre” that his contract talks – as well as Steven Stamkos and Eric Staal’s talks – have not had significant movement or any finalization.

“Many have reported over the past several weeks if not months that the Kopitar deal is imminent. Our group felt there would be an announcement coming early in the new year, in January. Unless Dean Lombardi between about 10 p.m. last night and early this morning has some epiphany and changes his approach, it’s not likely going to happen. Not necessarily that the extension isn’t going to happen, but an announcement any time soon may not happen, and this is not sitting well with his star. It’s a dangerous game Lombardi and the management of the LA Kings are playing these days.”

So, there’s nothing imminent, Kings fans. LAKI had continually targeted January as the month that the new contract would be finalized and announced, but at this point there’s nothing on the verge of being wrapped up. There’s no real alarm at this point, because there’s no threat of Kopitar getting moved at the trading deadline, but it is interesting that negotiations have dragged on this long – and that Kopitar has moved forward with his best hockey of the season. He now leads the Kings with 35 points (12-23=35) in 42 games.