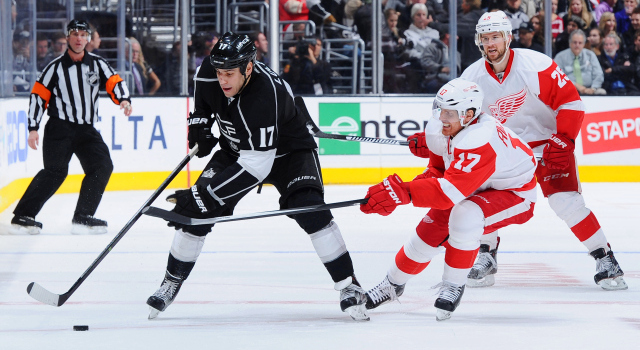 Azne Kopitar, on the difference in their game compared to Saturday against St. Louis:
I don’t know, just maybe simplified it a little bit. We actually had some pretty good looks against St. Louis, too. But on the one that I have, the goalie made a pretty good save and Ty hit the post. Tonight, they just went in. So that’s about the only thing I can really point out. Maybe just simplified it a little bit, looking more to take shots and converge on that instead of trying to make the perfect pass or the perfect play. So I guess just simplify.

Kopitar, on battling back after surrendering an early lead:
We’ve had some chances, too. I mean I can only talk for my line but Ty had a pretty good chance right after they tied it up. So it was really just a matter of sticking with it. We knew we weren’t playing awful by any means, but we definitely knew we had another step to take and we did.

Kopitar, on whether he is “in the zone”:
I feel pretty good.

Kopitar, on how he maintained possession while on the power play waiting for his teammates to enter the zone:
I’m just trying to turn it up as quick as I can because I knew there was a few tired guys out there and then I just tried to get as much speed as I can and go in and protect the puck and make the play from there. After I got in there, they kind of backed off and I saw Drew, Drew saw Marty and then obviously a good shot by Marty.

Kopitar, on whether they have been building momentum since the Christmas break:
Yeah, I think so. I think even before the Christmas break we were playing pretty well. But yeah, it’s just about building momentum, putting games together, putting mini streaks together, most importantly, not losing two games in a row. So now we’ve got to keep on rolling. We’ve got a little break here, so we can maybe recharge just a bit and then get back at it.

Tyler Toffoli, on the victory:
I thought we came back and finished real strong. Kopi obviously had a huge night and put the team on his back and we got a big win here.

Toffoli, on whether he was expecting the pass from Anze Kopitar for his goal:
I wouldn’t say expecting, but I knew it was a possibility and it was just one of those goals that I wish you could score 20 of them a year. So I just went to the net and Kopi made a great play.

Toffoli, on what led to success on the power play:
Just shots, recovery, all the things that we talk about – we talked about it this morning. Getting pucks to the net and we did a good job of that and Marty scored a huge goal and Kopi with a nice shot.

Toffoli, on whether he plans on resting on his days between games:
Lots of sleep.

Toffoli, on whether he feels more comfortable playing with a right-handed or left-handed center:
I think anybody on our team as a centerman is pretty easy to play with. They do all the little things right and so far it’s been working real nice with Kopi. He’s been playing great, like I said, putting the team on his back here.

Toffoli, on whether he sees any differences in the team’s play from game-to-game:
I think our power play was the difference for us tonight. Obviously against St. Louis, we had some chances and didn’t score. Tonight, I think right from the first one, we had a minute power play and we had chances. Kopi got the power play going there and Marty with the huge goal.