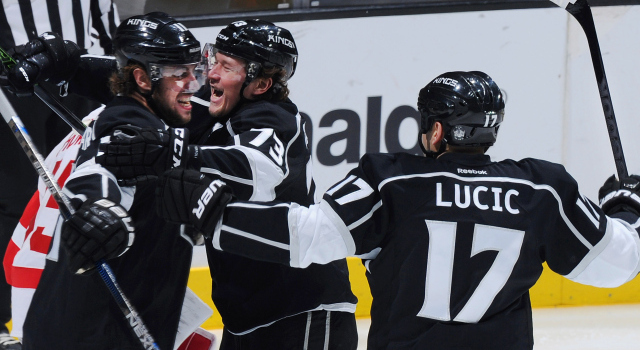 On the win over Detroit:
I think our guys dug in and got the job done. It was a hard game.

On Vincent Lecavalier winning 13-of-16 faceoffs:
I thought Kopi and Vinny were both really good in those areas. I think they were out there for just about every draw.

On the power play:
They scored big goals, if you look at obviously the tying [goal] and game-winner.

On Anze Kopitar:
Every game’s different and every game takes on its own little deal, but after the first period I think he took over the game. I think that was obvious from where I was standing. Him and Drew were prominent, prominent guys tonight if you were looking at it from a neutral party sort of thing. They were both dominant players.

On why he chose to reinsert Nick Shore back into the lineup:
Just energy. I don’t think we’ve had a lot lately, and the schedule caught up with us a little bit. Just trying to get some young guys in there and give us some energy.

On whether having four days off is good for the team right now:
Yeah, I think it is. Tomorrow would’ve been a scheduled day off, anyway, so we’ll get a day of practice and then go from there. See how they look on- what day is that – Wednesday. The days run into each other.