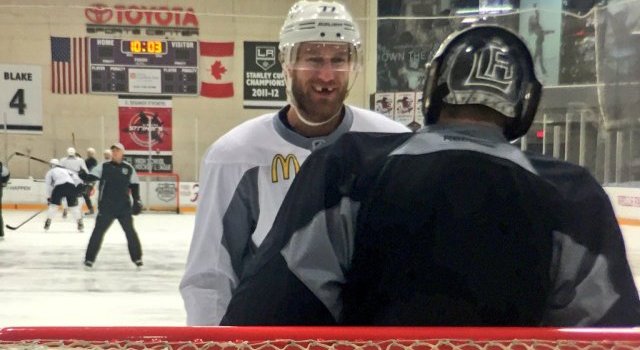 Good morning from El Segundo, Insiders. It’s a Monday, so let’s get down to the nitty gritty.

-There may be lineup changes in store for the Kings. Michael Mersch, Andy Andreoff and Jamie McBain remained on the ice for extra work with Jhonas Enroth, the assistant coaches and several members of the club’s development staff, so they’re not likely to be in the lineup tonight against the Detroit Red Wings. Nick Shore was among those who left the ice early, so count on him getting back into game action tonight after having sat out the previous two games. Jonathan Quick left the ice first and is the expected starter against the Red Wings.

-The skate ended quickly, and line rushes were either held before the 10:00 a.m. arrival of reporters or not held at all. Because Shore, a center, could return to the lineup in place of Mersch, a winger, it’s possible that Shore would return to center the third line while Lewis slots to the left of Vincent Lecavalier and Jordan Nolan. Or, Lecavalier centers Dwight King and Dustin Brown while Shore centers the fourth line. There are a variety of other possibilities, but those seem the two most likely to occur.

-Jimmy Howard will get the nod tonight after Petr Mrazek backstopped Detroit to its fourth consecutive win last night, a 2-1 regulation victory in Anaheim. Howard has been pulled from his previous two starts, which were on December 22 and 29.

From Helene St. James of the Detroit Free Press:
As of early this morning California time, the Wings had not made any moves to activate defenseman Kyle Quincey, as was the plan Sunday. Defenseman Jakub Kindl cleared waivers over the weekend, but sending him to the minors only gives the Wings $950,000 in salary cap relief. Quincey has a $2.4-million salary cap hit.

-More to come, including some Darryl Sutter observations as well as a Milan Lucic story. Enjoy this Monday game day, Insiders.