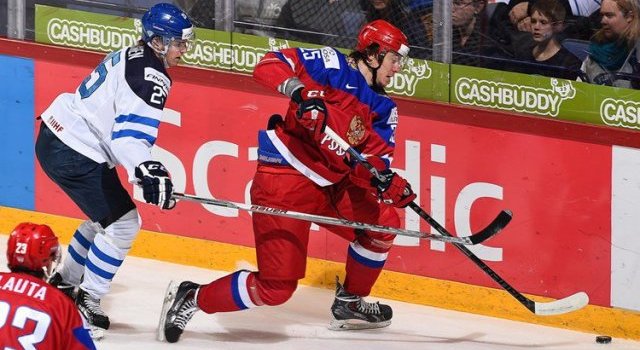 NHL prospects and draft expert Corey Pronman also reported on the tournament’s standouts, surprises and disappointments and listed Kempe in the standout category, saying, “His speed is elite, and he’s one of the best skating forward prospects outside the NHL.” For more on Pronman’s analysis, follow this link (ESPN Insider subscription needed).

On whether Alexander Dergachyov’s style of play fits the Kings:
He plays the Kings way, and our development guys haven’t really even gotten a hold of him. He’s very similar to the way Dwight King plays the game as far as a big body, skates well. He’s only going to get better that way just being over here and working on the North American game. But his net-front presence, it kind of summed it up on that goal that [Russia] tied it up late [in the gold-medal game]. The goalie just couldn’t see anything. Provorov got the puck through, but it was like a wall in front of the net. He’s working on his English, and it was really good. Sharpy’s a little different. Sharpy already plays over here in Owen Sound. He’s already got the language down, but Dergy’s working on it. He’ll be here next year, 100%. He’ll probably be in Ontario, but he’s already made that commitment that we’ll get him signed as soon as his KHL contract runs out at the end of the year.

On Adrian Kempe’s tournament:
I think he had a great tournament. I think he would admit it, the game he’d want back was the Finland game. To his credit, he took a bad penalty early, and then the refereeing in general, there were just some strange calls, and it’s hard when you’re playing on emotion and going that hard. Like, he got another penalty right away, and you could tell he got off his game, and the whole team was pretty frustrated with the way the game was being called. But in general, he was the best player every other game, and even the [bronze medal] game against the States when most of his team seemed to mail it in, he was the best player on the ice for them. He took a lot of pride in it. I mean, his line, he would’ve been playing with Nylander. When Nylander went out hurt and he got hurt early, it kind of changed their lines and changed his role a lot, but he was awesome. I mean, his attitude was great. It would’ve been nice to see him get a medal, but you see him go back [to Ontario] last night, he was on the first flight back and he goes back, and I think he was the second star last night, so he did us proud. It was good for him. It was frustrating, though. Those kids, when they play for their country, they get so excited, and especially, you can tell if they get beat that badly in the bronze medal game, it was tough on him.

On Erik Cernak:
He’s actually been playing really well in Erie. He got injured, as well. He’s flying in on Sunday to have his wrist looked at here, but he’s the same. Coming over and playing the North American style has been really good for him, but he’s got to get more consistency. His A-games are outstanding and his A-shifts, and then there’s some dips, so it’s just a matter of that consistency factor with him. But he was good. I mean, he’s counted on for huge minutes. Like, he was counted on for huge minutes last year at the World Championships, so it’s nothing new to him, so it’s good. [LAKI: I can imagine with Cernak you have a great, raw package to be able to work with.] It’s another one. You see certain parts of him, and to be able to skate at that size, and again, it’s just becoming more accustomed to the North American game, to the language. He’s another one where he’s always smiling and nodding at you, but I would rather someone stop you and tell you they don’t understand exactly what you’re saying than smile and nod and assume that everything’s all right [laughs]. But his attitude’s been great. I know they’re really thrilled with him in Erie, and their team is hoping to make a run at the Memorial Cup again, so once he gets in and we find out exactly what’s wrong – hopefully he’s not out long-term – that he’s ready to go and has a strong end to the season here and a good, deep playoff run in junior hockey.

On the atmosphere in the Finland-Russia final:
Electric. You only see it, from my standpoint last year in Canada, seeing the Canadian fans live it to that extent, and sometimes we take for granted that those are really the only true, pure hockey fans, and the Finnish fans were unbelievable. And you could see it even in [Director of European Scouting] Christian Ruuttu, the pride they took in winning, and to win it at home. It was so unbelievable to see a tournament dominated by draft-eligibles. Like those two, Laine and Puljujarvi, they were so good, and Laine became the media darling, saying all the things you’re not supposed to say to fire up other teams, but then he’d go and back it up, so it was nice. And the Finnish fans, I don’t think they need an excuse to celebrate at the best of times. As freezing as it was outside, they were partying and enjoying it, and well-earned. It was really nice to see for them.