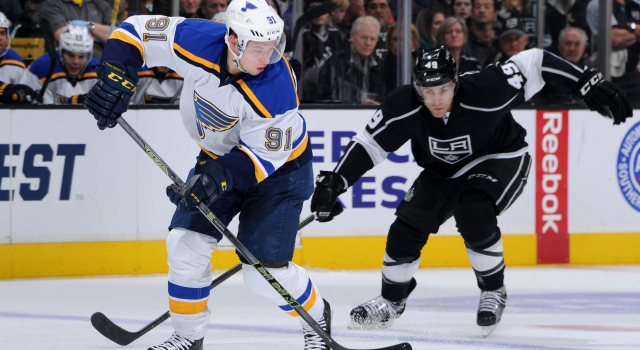 David Backes, on the physicality of the game:
Yeah, it was almost playoff style where you knew one mistake could be the difference in the game. I think we spent too much time in the box. I think we’re fortunate to get that five-minute penalty, power play in the third. We were able to eat up some clock and find a way to get to the overtime and find one point and then win it in the shootout. It’s a good feeling. We’ve been there a couple times and haven’t got that result and take two points and get home.

Backes, on whether their recent schedule has felt like a playoff run:
Yeah and I don’t think it’s going to change with how tight the Western Conference is. Every night is going to be every team’s best game and every two points is so crucial and you’re moving up or down in the standings. We’ll take these two and enjoy them for a day and then put it behind us and take an extra point home.

Brian Elliott, on getting the win after losing recent games in overtime:
Well tonight was a reward, yeah. We’ve had some tough goes. Blown a couple leads in third periods. I think today we started doing a lot of the things that we wanted to. We stuck to the game plan and played a hard game out there, a physical game. It seemed like kind of familiar to playoff hockey here.

Elliott, on what it means to earn a victory with so many players out due to injury:
It just shows the importance of the depth that you have to have and the guys stepped up today and yesterday and filled some holes that are significant. We were going to have to do it for a little bit here until those guys get back and everybody is looking forward to that challenge.

Elliott, on his reaction to winning the game in the shootout:
I let out kind of a girly little yelp there when we scored that in the shootout. It’s been a hard go the last couple games. But to get that in a building like this, against a team that brings it every night, it was big for us.

Ken Hitchcock, on whether he is happy with his team’s performance:
Oh yeah, it was four games in a row now we’ve really dug in. You’re getting into this overtime or you get it into extra time or whatever – you’re going to win some of those and lose some, but we’ve now played really well for four or five games in a row. So we just have to keep it going.

Hitchcock, on whether the game demonstrated the “steely resolve” he wants from his team:
Yeah, we started to see signs of it when we were at home and now it’s just growing. It’s getting better and better and you’ve got to be impressed with [it]. I mean, this is one of the… to come from altitude and then play a back-to-back against two big physical teams, this is one of the most difficult road trips you can go through. Coming back down from altitude, you’ve got no energy and to play the way we did in the last two games is pretty impressive.