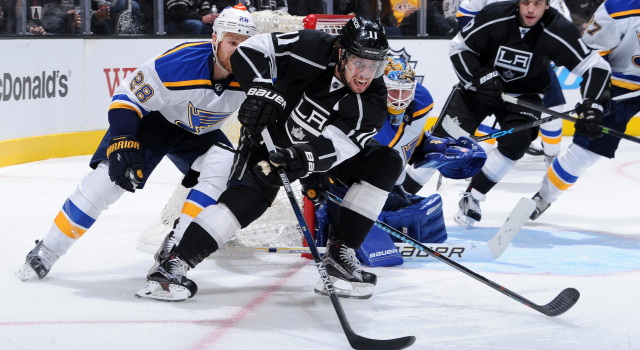 Anze Kopitar, on Brian Elliott’s performance:
I thought it was pretty strong. In the shootout he was big, he was making saves.

Kopitar, on whether he liked the team’s performance in the shootout loss:
Yeah. I thought the effort was there, but it wasn’t enough. We have to find more ways to score more goals at home, and lately maybe we’ve dropped off just a little bit. Maybe we’re relying on Quickie a little bit too much. We’ve just got to find the back of the net, that’s the bottom line.

Kopitar, on his goal:
It was a play in the corner. I saw Looch getting the puck, and I just wanted to make sure that I got somewhat towards the net, and I was able to beat the guy and then just tried to get it up as quick as could and it worked out.

Kopitar, on the team’s defensive performance:
We played pretty solid. I don’t know what the shot totals were, but I don’t think they had too many shots, and in saying that, they had a five-minute major that usually gets it up, but I thought we did a pretty good job.

Jake Muzzin, on the shootout loss:
I thought we did a lot of good things. We kind of fell into not a goal scoring slump, but not bearing down on our chances. I think we created chances, so just bearing down on our opportunities. Our power play didn’t really do much tonight, so we’ll look at some stuff and try to improve on that. Our penalty was good. It helped us late kill that five-minute in the third. It was big and it got us a point.

Muzzin, on Brian Elliott’s performance:
Yeah, he was good, and I think we had some opportunities where we should have scored and we didn’t. I mean, you can’t just say that as an excuse. You’ve just got to bear down a little bit more on those opportunities.

Muzzin, on creating opportunities but not scoring:
That what it was, I thought. We did a lot of good things, and we just can’t fall into being OK with creating chances and not scoring on them.

Muzzin, on Brayden McNabb’s ejection:
It’s a tough call. I mean, the play happens so fast that it’s tough for the refs. I think it was actually kind of a little bit similar to the hit I had in Phoenix where the guy was kind of falling mid-motion to hit, and it happened so fast the guy was hurt. It’s a tough call.

Muzzin, on whether Darryl Sutter is often as demonstrative as he was after the ejection:
No, not really. He must’ve felt strongly against the call, and that’s why he was a little fired up. Like I said, it’s a tough call, it’s fast.