Waking up with the Kings: January 8 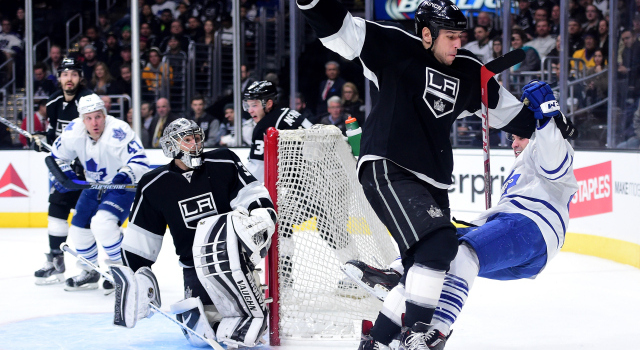 Scoreless games can occasionally be dull – see: Edmonton’s 1-0 overtime win over Carolina on Monday – and they can be tense, interesting games with emotion and dazzling displays of goaltending. The latter surfaced on Thursday night at Staples Center as the Kings broke a tight game open with two third period goals after 40 scoreless minutes and held on for a hard-fought 2-1 victory over the Toronto Maple Leafs. James Reimer, who has had the Kings number during his limited cross-conference career opportunities, was outdone by Jonathan Quick in a tremendous goaltending performance in a game in which the Kings’ possession game was a key strength as they were able to get pucks through to the net and had all four lines going well. Minutes were distributed more evenly in the first game with the two new additions as Drew Doughty was held to 26:42 of ice time, below his seasonal average, and Luke Schenn (15:59) and Christian Ehrhoff (16:22) totaled minutes that represented a step forward from the time on ice logged by the third pairing in recent games. For the forwards, eight skaters were in the 12-to-18-minute range, with Anze Kopitar (21:06; below his seasonal average even though Carter’s minutes were down) and the third line serving as outliers. Speaking of Carter, he played 14:24 in his first game back from injury and took only five faceoffs, though he did account for the team’s game-winning goal.

Both Vincent Lecavalier and Luke Schenn were solid after a day of travel and with adrenaline fueling their performances. Lecavalier crafted several savvy plays around the net in the first period in which he nearly banked an assist in the first 20 minutes, and even though the 35-year-old version of Lecavalier doesn’t come equipped with the same gifts as a 25-year-old Vinny, he’s still a highly intelligent player with terrific offensive instincts, and he allowed Los Angeles to play with the lead as he maintained possession of the puck deep in the offensive zone in the third period, drawing a crowd of bodies before finding an open Jake Muzzin, who crept towards the top of the left circle and beat James Reimer with a sharp wristshot to open the scoring. Schenn is in a good situation. He’s an unrestricted free agent, and were he to have remained with Philadelphia, he’d have been looking at the status quo, both personally and team-wide. Instead, he now has an opportunity to raise his own stock on a team that has a chance to make some noise come spring, and as someone who will be clearly slotted into a depth-type role and who can help spell minutes on the right side of the lineup, his presence is an appropriate fit. His stint in Philadelphia didn’t provide the most sharp or accurate picture of what he’s capable of providing to a team.

There was a lot of jump in Marian Gaborik’s game, and it translated to a key assist on Jeff Carter’s game-winning goal. The puck was finding him in transition and the offensive zone, and after Peter Holland freed the puck from him during a third period left wing drive, Jeff Carter got a stick on it to an in-support Tanner Pearson, and his pass found Gaborik in front of the goal line. Gaborik centered to Carter, who finished off the high-power move that represented the combination of speed and strength inherent in the Kings’ game when they’re going well. As has been mentioned on this column, his play has been trending well since the end of November. It will be interesting to see if he and Pearson can maintain a high level of play around Jeff Carter, which allows for the intriguing Anze Kopitar-Tyler Toffoli combination.