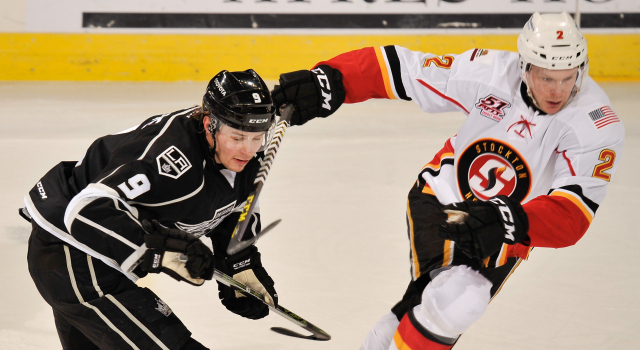 Reign head coach Mike Stothers, on the goal outburst:
I don’t know if there’s an explanation, sometimes you score, sometimes you don’t. Again, I go back to, you don’t fret about it too much when you don’t, and you don’t get too jacked up about it when you do. Bottom line is we won the game, so, we scored one more than we needed to over them and got us the win, so that’s good.

Stothers, on the penalty kill, power play and game overall:
I think that was the first two shorthanded goals we got all season long. I don’t know how you explain that one either. The special teams were good. We got a couple power play goals, we got a couple shorthanded goals, so that’s a good thing. It obviously helped having Kempe back. Changes the lines a little bit. Gives us a little more offense, gives us some speed. Forbort, gives us an NHL-caliber defenseman. So, you know what, I like what I saw tonight. Now we’ve got to make sure we carry it over to tomorrow.

Stothers, on Adrian Kempe’s play in his return:
He comes in, what did he have, a goal and an assist tonight? And suffering from jet lag. Hopefully he’ll be able to get through tomorrow. He’s a young guy, he’s exciting. He’s prototypical of what an athlete should look like. He can skate, he can shoot, he can pass, he thinks the game. He’s got some good size, he’s strong. The only thing that he needs is experience, I think. And I think soon he’s going to be playing in the NHL.

Stothers, on if he saw any rustiness from Kempe and Derek Forbort:
No, actually I thought they looked pretty good. But it’s always the next one that I worry about. That’s the one. So tomorrow will be a better test for those two in how they respond and recover from back-to-back games, kind of getting adjusted and acclimated to the American Hockey League. We’ll let them enjoy tonight and then we’ll put the screws to them tomorrow, challenge them again.

Stothers, on the scoring slump and breaking out of it:
It was just one of those situations where we were in a little bit of a funk for a weekend. We’re probably going to experience it again. I think you can see when we’re skating, which we were tonight, when we’re moving the puck, which we were tonight, it’s lot more fun to watch our team. It’s a lot more fun to stand behind the bench and coach our team.

Stothers, on what he expects from Forbort going forward:
I just want Derek Forbort to be what he is: Steady, reliable, dependable. He’s a defender. He’s a defenseman. We’re not asking him to lead the rush. We’re not asking him to score points. We want him to be a leader and build off the experience he had the last few years and the experience he gained playing with the Kings. That’s invaluable. This guy’s been playing in the NHL, so he’s seen the elite of the whole world. It’s great. He’s a very professional guy, he’s quiet, soft-spoken, he’s not a rah-rah guy. But he’s a good leader, he’s a good example. I know he’s anxious to get back up and to do so he needs to play well, he needs to play well for us.

Stothers, on goalie Peter Budaj:
He was good. I think that’s the first good game he’s played for us all year (laughs). He’s been outstanding. They had some good scoring chances. They had three in the second period right from the slot. He was unreal. That’s what you need. You need the save when you need the save and he’s provided that for us. I don’t think I need to go on and on about Budaj. I think you guys know how I feel about Buds.

Adrian Kempe, on how he felt in his first game back:
I felt good. I thought I was going to be a little more tired than I was. I felt great out there. I had a good start right away when I got out there and I just felt good the whole game.

Kempe, on scoring in the return:
I think the whole team played a really good game and we scored a lot of goals and I got a couple chances there in the first period and didn’t score. Finally I got a good chance, a good pass from Army there. I just put it in the back of the net. So, it was nice.

Kempe, on World Juniors vs. AHL:
Of course it’s going to be a little bit hard to get back in this game. This is a men’s league here and a little bit faster game. I thought I played good the first period, second period too and I just kept going. Had a really good third period. The whole line was great out there.

Kempe, on what happened in the second when he limped to bench:
I got a cross-check in my hip. It hurts a little bit but I was fine after a while. Feeling good now.

Dowd, on what Kempe brings to the lineup and how it changes everything:
First, speed, obviously. He’s got great vision, makes a lot of plays out there. I think his two linemates tonight, whoever he’s playing with, I think the guys were appreciative of it tonight. Obviously he makes high-end plays like on that 5-on-3. He gives me a backdoor and that’s something we were missing on the previous game when we had a 5-on-3. It’s good to have him back, it’s good to have him in the locker room. Guys enjoy being around him.

Dowd, on breakouts being more crisp as well:
I think it just begins with our skating. If guys are going to come all the way back, five men connected and then come up the ice together, it makes a big difference as opposed to guys only getting back half a zone and stuff like that. You turn a 8 to 10-foot pass into a 30-foot pass, you’re going to have a likelihood of a turnover compared to a 10-foot pass. I thought our centers again did a good job of getting back and I thought our wingers did a good job getting back too. Our D’s skating. It’s huge if our D can jump into the play.

Dowd, on if this is the team’s best win of the season:
Uh, I just think it’s another win, and we’ll take it.

Dowd, on Brodzinski’s goal and his read in intercepting Heat breakout pass:
It was definitely high risk. If I jump in and the guy looks me off then my winger’s behind me. I took a chance and luckily I read it well and was able to catch it and get it on net right away. Jonny, being a goal scorer, just found the back of the net and slipped it five hole.

Peter Budaj, on his All-Star selection:
Definitely it’s a great honor for me to represent my team, organization and my family too. I’m very proud, very thankful. I’m glad I’ve been playing well but also it’s a reflection of our team. The team in front of me is playing really good. When you look at the standings that’s why we are on top. We’re playing well, everybody. [Reporter: What does it mean after you had such a tough time last year?] It’s very satisfying. I’m very thankful I was able to get a chance here, stay healthy and work hard and got a chance to play on such a good team that we have here. Everything has been going well for us and I’m very happy for that. It feels very special. Last year was tough on me and my family. I try to persevere and stuck with it and work hard and it’s paying off right now and I’m very thankful for that.

Budaj, on playing with the lead tonight:
In the NHL and this league you don’t score many goals just shooting on a goalie. You score with the rebounds, deflections and battle in front and that’s what we did. It’s great when guys give you a little cushion. It feels much easier.