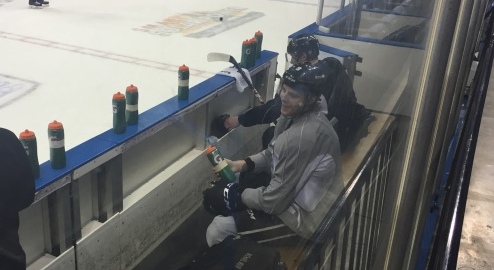 Welcome back, Adrian Kempe. The forward returned to the Reign on Thursday and skated in his first practice since he left the team to compete at the World Junior Championships in Finland for Team Sweden. Kempe said he was, “glad to be back,” and got into Ontario on Wednesday. He missed eight games with the Reign and will make his return on Friday when the team hosts Stockton at 7 p.m. Here’s a breakdown of his play in Finland if you need to catch up. Thursday he was skating on the wing on a line with Derek Army and Sean Backman and got some stick taps from his teammates when leading the team in stretches mid-way through the skate. Here’s what he had to say after practice:

Q: How are you feeling? A little bit jet-lagged?
A: I feel little bit jet-lagged, it’s like a 10-hour difference than in Finland so I feel a bit tired. I slept pretty early yesterday, I woke up at little bit early this morning so it’s going to be pretty tough the first couple days here but I’m going to get into it as fast as possible.

Q: How was your experience and how do you feel you played?
A: I think I played pretty well. I had a tough start. Me and my two lineys too, first couple of games. I think we got into it there maybe after like two games or something. I think we played better and better the whole tournament. I think we played really well at the end so I think it was a good tournament for me.

Q: What was the difference in the semifinal loss against Finland?
A: I don’t know what the difference was. It was a really tight game. We knew it was going to be a really tight game. We got a couple stupid penalties there in the second period. We had like two penalties that I don’t think was a real penalty. But, we got them and we knew before they had a really good power play. They took advantage of that and scored two goals there in the second period and we tried to get back in the third period but we didn’t get that many chances and we didn’t even get a power play in the third. It was a really tough game and I was really mad after the game. It was tough for the whole team.

Q: Are you referencing your interference call there?
A: Yeah, I think that was pretty tough and we had a two-plus-10 for boarding or something like that but I don’t think that was a penalty either. It was tough for the team and when you look at it after you get really upset after you see that it’s not a penalty. So, yeah, it was tough.

Q: What did you think happened against the U.S.? Was the team just uninspired after the tough loss to Finland?
A: Yeah, a little bit. I think we played pretty good the first period. We got back, we were down 2-0 and we got back up to 2-2. I think in the second period they got a couple goals and we didn’t have energy left from the game before. The whole team was pretty … it was a tough loss for us against Finland the day before. We didn’t have that energy to get back in the game in the second period. Was a tough game for the whole team.

Q: Did you keep tabs on the Reign while you were away?
A: Yeah. I saw a couple games and that they hadn’t scored that many goals and I’m just glad to be back now and try to bring my game and keep shooting much and probably the goals going to come in for me too here.

Q: Can you reflect on World Juniors now that the experience is over for you?
A: It’s a really good experience I think. It’s really fun to come home and play with the guys you played with your whole life before you moved over here. I remember last year it was a really good tournament for me and before this year I just wanted to go over there and play my game and be one of the best players in the tournament. That was my biggest goal before the tournament. The whole team played really good in the group [stage] and we had a good quarterfinal too as well. Then in the semifinal we had a tough loss and, I don’t know, that’s it. Overall, I think it was a really good experience for me to over there this year too.

Q: What happened on the hit that took you out of the first game at World Juniors and was it precautionary that you were taken out?
A: I felt a little bit dizzy right after I got hit so we were up like 7-3, or 6-2 or something there in the second period so they didn’t want me to play if I had a concussion. I had to go through some steps there after the game. I felt pretty good after a while so they didn’t want me out there for the rest of the game because I think we were up 6-2 and it wasn’t a tough game anymore so I just took a rest there. I felt better the day after so it was good.