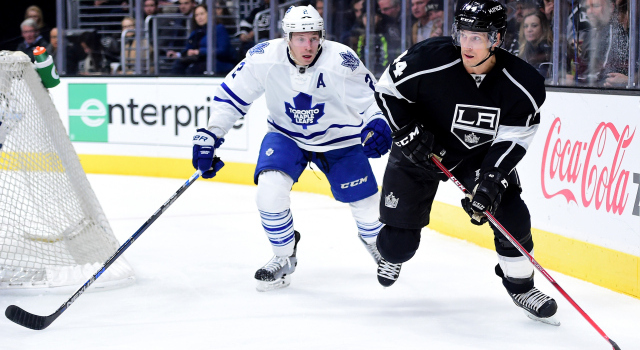 Vincent Lecavalier, on how it feels to record an assist in his first game as a King:
Yeah, it feels great. I think it was just a good team effort tonight. I mean just the support plays, the way they play, it’s impressive. It was nice to be a part of today and everybody worked really hard and it paid off.

Lecavalier, on adjusting to playing with his new teammates:
A great bunch of guys, I can tell already. I didn’t know a lot of them, but you can tell this room is a good room and it’s exciting. Everything was kind of quick, so I was kind of on adrenaline tonight and I’ll have a good sleep and start over tomorrow and have a good practice with them.

Lecavalier, on what he saw to set up Jake Muzzin’s goal:
I was just trying to hold [the puck.] At first, I was just trying to get the body position and I saw him kind of creep in. That was just a great shot. I mean right in the top corner. He missed one I think in the second period. So he made sure to put that one inside the post. It was a really, really nice shot.

Lecavalier, on what things he needs to do to feel more comfortable with the team:
It felt, like I said, this team is not like all over the place when they play. It’s really a support game. And I know I’ve said that three or four times already but it just makes things so much easier. Systems wise, obviously in the defensive zone I’m sure there’s a few things that I maybe could’ve done a little bit better but it’s all things I’m sure they’ll tell me more on video. It’s just about learning the systems. But for a first game, I felt good. I was afraid I’d be – my legs wouldn’t get going because the travelling and the lack of sleep the last few days, but I felt really good.

Lecavalier, on his first impressions of playing in front of Jonathan Quick:
Well I’ve seen him before. I mean I know what he can do and how good he is. So just to have a goalie like that, it just gives the whole team that confidence to just keep playing the way. Don’t get too excited and try to play differently. This team just plays the same all the time, consistently and that’s why they win big games 2-1 or 3-1. We just kind of keep going and that’s what we did tonight.

Luke Schenn, on his first impression of playing with the team:
It was exciting. I mean it’s a really good building to play in, it’s a good atmosphere. I just tried to soak a little bit in before the game and try to shake hands and get to know a few of the teammates. I’m not too familiar with a lot of the guys. It was kind of nice to just go out there. You don’t overthink things. You just try and go out there and play. It was a lot of fun, obviously real nice to get the win. It was a hard-fought game by both teams.

Schenn, on how he is settling in with his new teammates:
It’s going to be an adjustment here for a while. It’s a little bit different. I’m used to how they play playing in Philly. So it will be a bit of an adjustment, but the coaches did a great job before the game kind of bringing me up to speed, how they want me to play and what the system is. They made things easy for sure that way and the guys were great helping me along.

Schenn, on Jonathan Quick’s performance late in the game:
I mean it was the exact same thing last Saturday when we were here with Philadelphia. He stood on his head and made some unbelievable saves and he’s great in those pressure situations obviously. We’ve seen what he’s done in the past and tonight was no different. So it’s nice to have guys like that behind you, for sure.

Schenn, on when he found out he was going to play:
At about 12:30 this afternoon, we flew in. So we traveled I think it was five-and-a-half hours this morning. It was just kind of a whirlwind day. It’s nice to kind of, like I said, not go in and overthink things too much. Just go in there and play. I’m not sure what the expectations were leading in but luckily enough, it worked out and we got a win.

Schenn, on whether it felt similar to playing in a pickup game:
Yeah, probably a little bit more than that. Toronto gave us a good fight tonight and everything we could handle there. They’re playing real good hockey and it was tough 60-minute effort. But it was definitely weird being on the other side against them, like I said, a week ago or just under. Yeah, it’s an experience that I personally have never been through before. It was lucky that we got the win and just tried to fit in.

Schenn, on what it was like to be in a pressure situation at the end of the game:
It means a lot get that opportunity early on to have a little bit of trust from the coaches. I wasn’t sure kind of what the role would be, the opportunity. Obviously I know that LA has got a great defense and guys that can play in all different situations. Obviously I was thankful for the opportunity there and, like I said, luckily it worked out and we were able to get the win.

Schenn, on what Darryl Sutter said to him after the game:
He just said ‘Good job tonight.’ It was a long day of travel, so he told me and Vinny ‘Good job tonight.’ Back to work tomorrow and we’ll try and pick up and learn a few more things in how they want us to play.