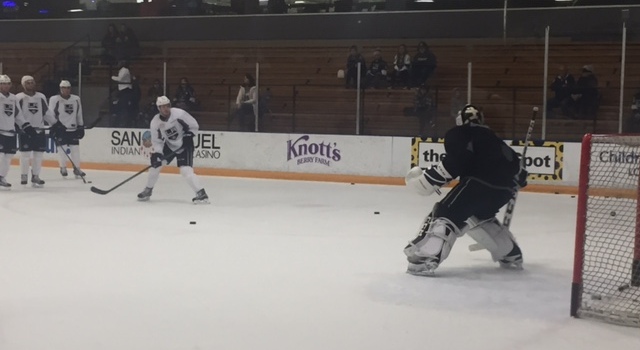 Good morning from El Segundo. There were no real line rushes at today’s skate, and because the team went up and down the ice in groups of three, it was a bit easier to get a sense of the forward groups than it was the defensive pairings. It should also be noted that the morning skate concluded at 10:07 a.m., which may be a record even for Viking Standard Time. Jeff Carter was on the ice and was grouped with Tanner Pearson and Marian Gaborik in getting up and down the ice, similar to yesterday’s alignment. Neither Vincent Lecavalier nor Luke Schenn were took part in the skate. It’s a bit tough to get a firm sense of who will be in tonight’s lineup against Toronto (7:30 p.m. / FOX Sports West / KABC 790 / I Heart Radio), and Darryl Sutter hasn’t met with the media yet, but the safe bet is the lines shown yesterday will hold up tonight, which could mean that Michael Mersch, Lecavalier and Schenn would be tonight’s scratches.

-I’ve been told that both Schenn and Lecavalier were supposed to have landed at 10:30 a.m. From LAX, they’re expected to take their physicals off-site before heading to Toyota Sports Center. As of now, they’re expected to meet with the media after the first day minutiae of joining a new team is addressed, but that might be pushed back. We spoke with Drew Doughty about the two new Kings earlier today, and I’ll share his sentiments soon.

-Kyle Clifford (upper-body) took the ice after the team’s skate concluded. He said it was not the first time he had gotten on the ice since suffering an injury when he was elbowed in the face by Tampa Bay’s Victor Hedman on December 6.

-Matt Greene (shoulder surgery) was in the team’s facility this morning. He is out for the season, Dean Lombardi said in yesterday’s conference call.

-As for Toronto, the Kings could see James Reimer in net tonight. From MapleLeafs.com:
Toronto will play the second of its three-game trip to California on Thursday; the Maple Leafs opened it with a 4-0 win at the Anaheim Ducks on Wednesday. After the victory, coach Mike Babcock said goalie James Reimer will start Thursday if he’s physically ready; Reimer hasn’t started since Dec. 3 because of a groin injury. Jonathan Bernier made 39 saves Wednesday and has started each of the Maple Leafs’ past eight games (6-2-0). “It was a good way to start the road trip,” Babcock said. “Obviously we’ve got a tough back-to-back with L.A. waiting for us [Thursday].”

-More to come throughout the day, including more coverage of yesterday’s trade…