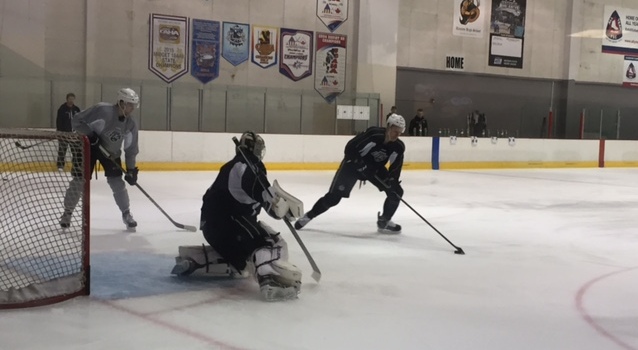 Some notes from inside a chilling Center Ice rink in Ontario for Wednesday’s 11:15 a.m. Reign practice following last night’s 3-2 OT win over Texas.

–As expected, center Kris Newbury (undisclosed injury) was not on the ice, but what was surprising was the absence of defenseman Nick Ebert. Reign head coach Mike Stothers said that it was sort of a maintenance day for Ebert and that it was “nothing.” But Stothers has been quite cryptic in regards to Newbury’s new injury and when asked if it was upper- or lower-body his answer was, “that’s a good question. It’s mid-range. It’s mid-range, how’s that. I don’t know if anybody’s ever put it out there as a mid-range injury.” After Tuesday’s game Stothers did say that he does not expect the veteran center to play this weekend. He’s already missed three games.

–The clock is on for Adrian Kempe’s return from the World Juniors. “The Kings are going to want him back as soon as possible … If he’s back, he’ll play,” Stothers said. The Reign host Stockton on Friday at 7 p.m., so we could possibly see Kempe then as Stothers said he would not stall in getting him back into the lineup even if it comes without practice time to acclimate himself back. “We’ll be looking forward to getting Kempe’s skill and his speed. He’s a prospect so they want him playing as much as possible,” Stothers said Wednesday. When Newbury was previously out of the lineup nursing a broken foot earlier this year, Kempe moved to center. Now, with Newbury out again, the Reign brought in Derek Army (more on him later). So, is there a chance we see Kempe move off the wing and back to the middle? “That’s funny because we just talked about that this morning,” Stothers said. “We can put him into the middle if we need to. … With Kempe in the lineup wherever he is he gives us a little more skill to complement the lines. If Army happens to part of that sort out maybe it helps him because he comes to us as a bit of a playmaker, a bit of an offensive guy, so he should play with skilled guys, not that the other guys aren’t. So it might work favorably for Army to have that. Say you throw Kempe on the left with Backs on the right, that’s a lot of speed, that’s a lot of talent, that’s a lot of skill to go with a guy who’s just getting his feet wet. Might be exactly what he needs to get going.”

–Ironically enough, Army had played in more games (3) than actual practices (0) before Wednesday’s skate. Army, formerly of the ECHL’s Wheeling Nailers, was brought in before last Saturday’s game against Charlotte when the Reign realized they’d be without Newbury. So here’s what he thought of his first workout with his new teammates: “For me it was good. Guys are talking to me, guys are letting me know what I should and shouldn’t do. So it’s very helpful but it’s nice to get a practice in and get some work in, that will help going forward.” And what does he think of Stothers? “He’s a great coach, talks to us, let’s us know what he likes, doesn’t like. He wants to teach us. We work a lot on breakouts and stuff right now and think that’s such an important part of the game, getting out of the d-zone and I think he knows that obviously so for us to work on that is big. It’s a little different than in Wheeling where I was because you only have three lines so you kind of practice a little bit lighter sometimes and you have a little more days off but it’s good to get a lot of work in. It was nice to be on the ice today.”