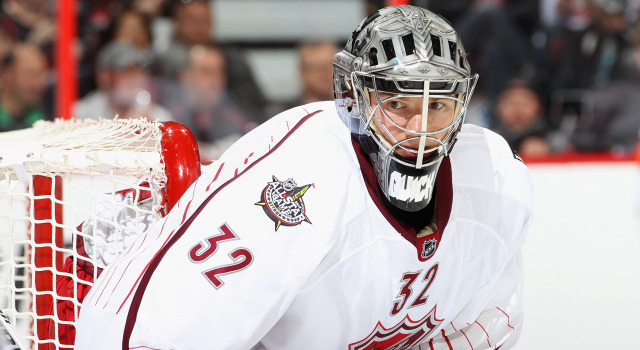 If Jonathan Quick and his family were planning to get away for the All-Star Break, may we suggest a re-route? Something that goes through central Tennessee, perhaps?

“Change it to Nashville, I guess,” he said Wednesday when meeting with reporters shortly after it was announced that he, along with Drew Doughty, would represent the Kings at the 2016 All-Star Game at Bridgestone Arena on the final weekend of the month. Despite the change of plans, he’s looking forward to his second career mid-season All-Star recognition.

“I think I’ll plan on trying to bring the kids out for this one. I think they’re old enough now. Either way, it’s obviously an honor to be a part of it, But we’ve got a lot of work to do before that gets going.”

That work will continue Thursday night when he’ll be expected to draw the start against the Toronto Maple Leafs to kick off a four-game home stand. One of the players who will look to provide exceptional work in front of him will be Doughty, who like Quick will be taking part in his second career All-Star Game.

“It’s fun,” Doughty said. “I mean, you get to meet a lot of guys around the league that you’ve never met before, you get to hang out with them a little bit, whether it’s in the dressing room or outside of the hockey facility all together. But going to Nashville, I think Nashville’s a great place to have it, you can go out anytime and listen to country music, and I think we’re going to have a lot of fun.”

Darryl Sutter will coach the Pacific Division team, which in addition to Quick and Doughty is also comprised of Johnny Gaudreau, Taylor Hall, Joe Pavelski, Daniel Sedin, Brent Burns, Mark Giordano and John Gibson in addition to captain John Scott, who was voted in by fans.

This year’s game features a three-on-three format with teams populated by division. The winners of the semifinal games between the Pacific and Central and the Metropolitan and Atlantic Division players will meet in the championship, with the winners splitting a $1-million prize.

“The winning part, I’d like to win obviously, win some money, that’d be cool, but I’m really just going to have a little fun,” Doughty said. “I know a lot of guys that will be there, a lot of guys that I haven’t met that will be there, so I’m excited to kind of meet them, spend some time with them and have some fun. I think that’s the most important part of the All-Star game, is hanging out with other guys from around the league because basically everyone I’ve ever met in the NHL is an awesome guy, so I look forward to that and I look forward to spending some time with Quickie.”

The appreciation the defenseman shared of his goaltender was mutual. Quick, who beat Jimmy Howard in the fastest goalie race at the 2012 skills competition – chosen to participate because his last name was Quick, according to the NBC announcers – credited his teammates for the league honor.

“Goaltending’s a very dependent position,” Quick said. “You rely heavily on the guys around you, and when they do well, it makes it look like you’re playing well.”

Drew Doughty, on building camaraderie with players he competes against:
There’s probably a few guys that will be there that me and Quickie don’t like too much or whatever it may be, but when you get there it’s all just fun. Everyone’s just doing their jobs out there, they’re not doing it to make someone hate them off the ice or whatever it is, it’s just about playing hockey and trying to win little battles within the game, so once you get there, everything’s put aside. It’s just about everyone being nice to everyone and having a little fun.

Doughty, on playing on John Scott’s team:
I heard he’s a pretty funny guy from what I’ve heard, so I’m looking forward to meeting him and hanging out with him a little bit, and hopefully he’s a good captain.

Doughty, on his All-Star experience:
I went when I was younger to Montreal as a Young Star and that was an amazing experience. That was crazy being in Montreal. When I went to Columbus, it wasn’t the same experience, but it was the first time that I was on the big team, so I had a lot of fun with it, it was kind of cool meeting a lot of those high-caliber players that you don’t get to meet in your life so far, so yeah, it’s great just hanging out with the guys, going out for dinners and stuff like that. It’s cool to meet new people.

Doughty, on whether he’s disappointed in the lack of a player draft this season:
It was pretty fun last year, the player draft actually. Yeah, I guess it kind of sucks, but this time I guess we won’t have to do an extra event, which is, I guess, a bonus too. You can just relax.

Doughty, on whether he thinks the game will be more competitive:
Yeah I do, because you can’t really hide in three-on-three, so you’re going to have to try or else everyone’s going to notice it kind of thing. Three-on-three isn’t a time where you need to get physical, and you can try in three-on-three without being physical, so I think it’ll make us try harder for sure.

Doughty, on what Darryl Sutter was like as All-Star coach:
Oh he was just hanging out, just having fun. He didn’t really care, just kind of getting to know the other guys. He got Chris involved which is obviously a lot of fun for Chris. Is he going again with Darryl? He wasn’t acting like he acts here, that’s for sure.

Doughty, on the team’s success in overtime this season:
Yeah, I think if you kind of look down the line and we put out our starting three against another team’s starting three, I think we’re pretty confident that we might have a better three out there, even four with Quickie in net. It’s been good for us, we take a lot of pride in it, three-on-three’s a lot of fun at the same time, it’s a lot of chances back and forth. I think the style we play where we take a lot of pride in playing defense, causing turnovers and going the other way, I think that helps us a lot in three-on-three.

Doughty, on whether he “chuckles” about Southern Californians driving in the rain:
Yeah I do, I do chuckle about that. People here can’t even drive in the rain so I can’t imagine what would happen if a little snow dropped. It would be quite comical. But yeah, it sucks it’s raining. I’ve been spoiled for eight years playing here with barely any rain so I can handle it for a little bit.

Jonathan Quick, on whether a longer summer kept the team rested for this season:
If anything, we’ll see if it pays off towards the back end of the season here. I didn’t want to come in and play good hockey for the first 40 games or whatever. It’s the back end and in the springtime – that’s where hopefully it’ll show.

Here's a look at the #NHL's all stars separated by All-Star Game teams. pic.twitter.com/r6vUfpkgPS