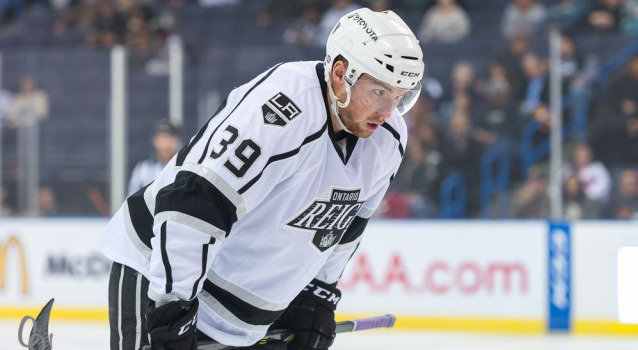 Reign game breakdown
The Reign snapped a three-game losing skid in dramatic fashion as Kevin Gravel scored 1:37 into overtime as Ontario defeated the visiting Texas Stars 3-2 on Tuesday night. Gravel’s winner from the right circle was set up by Justin Auger, who also had two goals in a breakout performance. The Reign (18-8-2-1) used Auger’s goals and the play of goalie Peter Budaj to keep a 2-0 lead midway through the third, but the Stars (17-14-3-3) rallied to tie it on goals by Brett Ritchie and Jason Dickinson late in the third. Forced into the 3-on-3 overtime, the Reign pulled out one of their biggest wins of the season in an important early-season Pacific Division matchup.

Best quote
Head coach Mike Stothers, on the team’s attitude after Texas tied it up late: “I was really happy with the way that we didn’t get discouraged. We had a two-nothing lead and it was different on the bench. The shoulders didn’t slump, the heads didn’t bow down. They were like, ‘hey, no big deal, we’ll get this.’ And that’s what you want to see from your team. Even if things haven’t been going great for us lately, and hey, one game does not make a winning streak. But, you know what, it could have been very easily with the way things have gone for us of late to say, ‘oh geez, tonight’s not the night either, maybe the next one.’ Not with this group. They’re never out of it and they stick together and they play hard. That’s why I like coming to the rink every day. I’ll be right back on the ice with them tomorrow.”

Three stars
–Justin Auger – Auger certainly picked the perfect time to have his best game of the year. With the Reign starved for goals and shut out in their last one, Auger led the way on Tuesday with his first multi-point game of the season, picking up his 7th and 8th goals. The winger’s 6-foot-7 frame played to his benefit when Texas goalie John Muse had a complete miscue and fired a clearing attempt right into Auger’s chest as he crashed the net. The puck bounced right off of Auger, who tapped the puck in to put the Reign up 1-0 at 10:28 of the second period. His second goal though was an eye-opening power move into the middle in the third where he whistled the puck by Muse again. It was the type of goal that we’re not used to seeing from Auger this year and Stothers said afterward that “it’s great to see and it’s much needed for our team.”

–Kevin Gravel – The Reign defenseman has four goals on the season, and now two of them have come in overtime (the other in a 2-1 OT win over San Jose on Dec. 13, 2015). The 6-foot-4, reliable blue liner is making it known that he’s hot in the clutch. After Auger took the puck off the boards and delayed, he then dished to Gravel, who buried the winner from the right circle. Auger could have shot but elected to pass and said after the game, “I just figured Gravs was too wide open not to pass to him. He’s had some luck in overtime before too. He’s got the hot stick in overtime.”

–Peter Budaj – Stothers said recently that he spells Budaj with an M, a V and a P. The Reign netminder lived up to that standard on Tuesday. He held high-flying Texas scoreless through two periods, and saw two breakaways in second period – one by Brett Ritchie (who shot high) and made a glove save on a streaking Greg Rallo with 4:11 left. The Stars came in averaging 3.86 goals per game and although Budaj gave up two goals in the third, they weren’t flukes. In his 14th straight start, he finished with 32 saves, including one in overtime, to pick up his 17th win.

Turning point
–Reign defenseman Vincent LoVerde was forced to take a slashing penalty after his errant pass to the middle of the Reign zone gave the Stars a mini-2-on-1 against Budaj at 10:57 of the third. That penalty resulted in the power play goal that sparked the Stars’ comeback as Ritchie beat Budaj over his blocker less than a minute later. As Texas gained momentum, they tied the game minutes later on a goal by Jason Dickinson from the slot.

Stat fact
–2 – Assists by center Nic Dowd. It’s easy here to focus on Gravel and Auger’s games but Dowd’s relentless forecheck in OT allowed the puck to get to Auger which resulted in Gravel’s game-winner. Dowd has seen his minutes increase with Kris Newbury out of the lineup with an undisclosed injury and said after the game that he’ll never complain about extra ice time. In every period of the game his line with Jonny Brodzinski and Auger was the best of the ice for Ontario.

This and that off-ice
Reign forward Adrian Kempe wrapped up his run at the World Junior Championships in Finland in a disappointing 8-3 loss in the bronze medal game to the United States. Stothers said Tuesday that he wasn’t sure when Kempe was returning but added, “I’m sure he’ll be back for the weekend.” … Defenseman Kurtis MacDermid served the fifth game of his 12-game suspension for his hit on the Gulls’ Matt Bailey on Dec. 26, 2015.

Next up
The Reign host Stockton in their final game of a five-game homestand on Friday night at 7 p.m. Ontario went 1-1 in two games against the Flames’ affiliate last week.