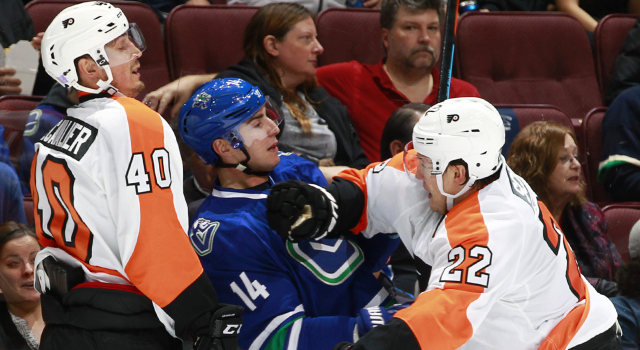 The Los Angeles Kings made a trade and a roster move that they believe will bolster their blue line and center depth, sending center Jordan Weal and a third round draft pick to the Philaelphia Flyers in exchange for righthanded defenseman Luke Schenn and veteran center Vincent Lecavalier.

The Flyers will retain half of both Schenn and Lecavalier’s cap hits, according to multiple league reports. According to Pierre LeBrun of ESPN.com, who spoke with Lecavalier’s agent, Kent Hughes, the 35-year-old Lecavalier will forego the final two years of his contract and retire after the season. The Kings would not be hit with any recapture or buyout penalty should that occur.

“We had identified even in training camp and moving forward a certain area that we might like to upgrade as we were watching our team this year,” General Manager Dean Lombardi said. “One of the issues was strength down the middle, and I think as we were working through this, I took it as how our division, our conference is, strength down the middle is imperative, and particularly, having that size.”

In his final season, Lecavalier now has an opportunity to play for a second Stanley Cup.

“I think he’s hungry,” Lombardi said. “Given his mindset and the fit on this team, I think it’s a potentially great fit in his role, and that’s the key. When you look at the history of things like this, with teams that have a chance to maybe to maybe do some damage, whether it’s a Bill Walton, a top player when he went to the Celtics, a guy here, Bob McAdoo, went to the Lakers. A guy like Darryl Strawberry and [Cecil] Fielder going to the Yankees, these were all top guys who, near the end of their career, wanted a chance to win and were willing to accept a lesser role.”

With Robyn Regehr, Jarret Stoll, Mike Richards and Willie Mitchell having moved on in the previous two seasons, it shouldn’t be unexpected to see the Kings add an additional veteran presence, and because Lecavalier is a former captain with a Stanley Cup ring, this acquisition could help fill a need even if the 1998 first overall pick from has been limited to one assist in seven games this season.

The Kings were expected to make a move to strengthen their blue line, and following the win over Calgary on New Years Eve, Darryl Sutter didn’t give off the impression that he had been wowed by the Ehrhoff-McBain-Forbort rotation, saying, “all three of those guys, one or two of ‘em have to declare that they’re going to be in every game, not every other game.”

With Matt Greene announced by Lombardi to be out for the remainder of the season following shoulder surgery, and given Slava Voynov’s departure, it was expected that the team could be focused on finding a right-handed defenseman who could absorb a greater degree of minutes on the back end. Jamie McBain, a right-handed shot, played only seven minutes in Edmonton, while Christian Ehrhoff, a left-shot who can play on both sides, has been in the 11-to-14-minute range since the Christmas break. Schenn, selected fifth overall in 2008, has averaged 17:35 of ice time this season.

“He’s very familiar with Drew Doughty and some of our players here, and it’s a chance for him to just come in and be himself, you know, and not have to worry about being a top pick and all of the expectations and everything else,” Lombardi said. “He kind of reminds me where Matt Greene was when we first got Greener, and these guys are important guys in the mix. So the way were able to put this deal together over the last month, it was a chance to maybe take a swing at filling two holes with one deal, and you know we’ll see, but that’s kind of the logic of the whole thing.”

Schenn is due to become an unrestricted free agent after the season. Lombardi said that the teams had been discussing the trade since October, and that affording an easing-in period and the ability to identify needs and available capital in advance of the February 29 trading deadline served as impetuses to move forward.

“It’s a very tight team and it allows them to get in here a have a longer feeling out process, get comfortable,” he said.

The Kings now have just over $600K of cap space, according to financials available at GeneralFanager.com.

In 29 games this season, Schenn has two goals, five points and a minus-seven rating. He has appeared in 523 career games with Toronto and Philadelphia. Lecavalier, who has 411 goals and 932 points in 1,170 career games with the Lightning and Flyers, has one assist and a minus-one rating in seven games. He was a 2004 Stanley Cup winner with the Tampa Bay team that beat Darryl Sutter’s Calgary Flames in the Final. Neither player has found success this season pushing play towards the attacking end, according to possession numbers available at War-on-Ice.

Weal, who had no points, an even rating, one shot on goal and two penalty minutes in 10 games, never seemed to be the right fit down the center of the ice with the current mix despite having earned the Calder Cup MVP with the Manchester Monarchs the previous spring. In essence, Forbort and Weal were replaced on the roster by Lecavalier and Schenn, who, while they weren’t necessarily experiencing signature seasons have still combined for 1,693 NHL games, compared to Weal and Forbort’s 24.

“Carter and Kopitar, we don’t anticipate going anywhere,” Lombardi said. “We’re breaking in Shore. You’ve got Andreoff and one of our best prospects in the minors, [Nic] Dowd. So probably this is a good opportunity for him to see if he can, in fact, stay in this league. I think it’s also a real benefit for him that Hexy knows him and brought him along, because Hexy ran the minor-league team [while with Los Angeles]. So the reality is, it probably was going to be difficult for him to break into this lineup with this group right now.’’

The team is hopeful that Lecavalier and Schenn will be available following Thursday’s morning skate.