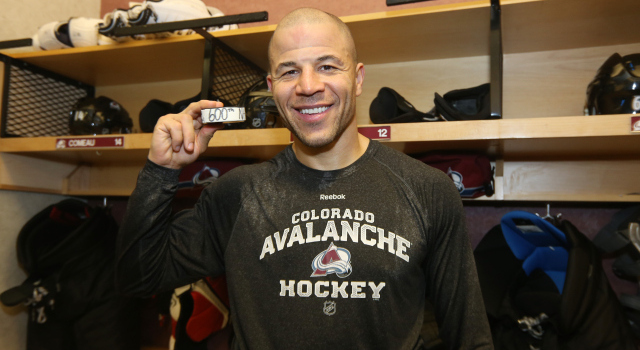 However one wants to dissect it, the Los Angeles Kings were not very good Monday night in a 4-1 loss to the Colorado Avalanche that appeared to reject the trends heading into the game. The league’s top possession team, which entered tied for the league lead with 13 road wins, lost by three goals to a team that ranked 29th in the league in home wins and were outshot by the league’s bottom possession team. It happens! Whether it was due to the compacted schedule that had the team play six games in six different cities over 10 nights, or the inevitable pains brought on by Jeff Carter’s absence, Los Angeles simply didn’t have its legs and was whistled for a few avoidable penalties in one of the few stinkers from the first half of the season. The Avs aren’t a bad team – compared to last year’s team they have slightly better scoring, defensive depth, and a vastly improved power play – and after entering 6-2-2 in their previous 10 games played one of their most complete games on home ice this season.

After Anze Kopitar was denied on the game’s second shift in what was perhaps the Kings’ highest grade scoring opportunity of the night, Jhonas Enroth engaged in quite a bit of bacon saving to allow Los Angeles to find its legs late in the first period after they went over 12 minutes between shots on goal. This game turned on the second of Tyson Barrie’s two goals, and credit Colorado for producing two very big goals that broke the game open. The first came on a four-on-one break that originated when Jake Muzzin had trouble playing a Milan Lucic feed at his skates, leading to the odd-man break that resulted in a goal only 79 seconds after the Kings had tied the game. Los Angeles had a poor final minute of the second period that resulted in Avalanche pressure and an Alec Martinez tripping call, and Colorado potted its second big goal when Matt Duchene deflected a Barrie power play shot past Enroth early in the third period to widen the lead to two. The Kings lost largely because they got into penalty trouble, had trouble killing off those penalties, allowed big goals, and weren’t able to generate much of a consistent attack. Tyson Barrie is also a fine, fine NHL defenseman.

In the past this page has virtually doubled as the Jake Muzzin Center of Propaganda when the defenseman plays particularly well (see: most of his games this season), but last night was not one of those games. He was a minus-16 in Corsi differential (!) – 10 shot attempts worse than the next lowest possession skater on the night – and was on the wrong end of a milestone highlight when Jarome Iginla’s centering feed redirected off his skate and past Jhonas Enroth for the future Hall of Famer’s 600th tally. It wasn’t a banner night for Muzzin, but hey, while we’re here, let’s all tap our sticks for Iginla, who joined the Kamloops Blazers as an undrafted player and will go down in history as one of the game’s great power forwards and goal scorers. Despite the loss, you could hear the emotion and honor in Darryl Sutter’s diction when speaking highly of the player he coached in Calgary and is known as much for his class, leadership and for being an excellent teammate as much as he is for his ability to find the back of the net. Congratulations, Jarome.