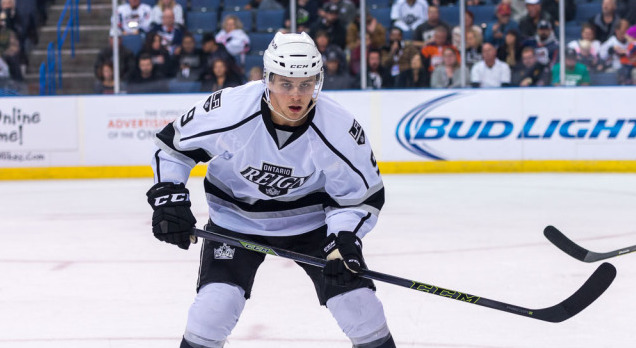 Reign forward Adrian Kempe won’t have a shot at gold at the World Junior Championships.

Kempe’s Team Sweden lost 2-1 to host Finland in Monday’s first semifinal and will play for bronze on Tuesday. They’ll face the United States, who lost to Russia 2-1 in the other semifinal on Monday.

Unfortunately for Kempe, his penalty in the second period started the Finns’ flurry, as they scored shortly after he exited the penalty box to tie the game at 1 on a goal by Roope Hintz at the 11:08 mark. It was Kempe’s second penalty of the game. Finland then took the lead on a power play goal by Antti Kalapudas less than two minutes later. Sweden had taken a 1-0 lead after the first period on great finish by Rasmus Asplund off a pass from Dmytro Timashov at 10:17.

Following the game, Kempe was named one of Sweden’s top three players.

Kempe has three goals and three assists through six tournament games. Sweden was the only team to finish group play undefeated, with a 4-0 record in Group A and advanced to the semis with a commanding 6-0 win over Slovakia, a game in which Kempe had a goal and an assist.

Kempe, the Kings’ first-round pick at No. 29 overall in the 2014 draft, has seven goals and nine assists in 21 games with the Reign this season and will return to the team at the conclusion of the tournament. He’s missed seven AHL games while competing in Finland.

The goal-starved Reign will embrace his return, as head coach Mike Stothers joked over the weekend that he’s “crossing off the days till (Kempe) can come back.”