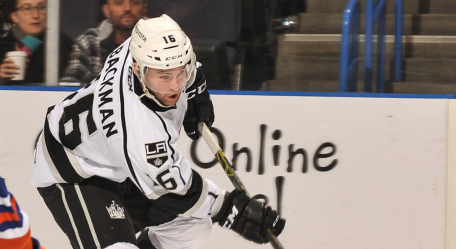 Reign head coach Mike Stothers, on today’s game vs. yesterday:
We were better last night. So that pretty much sums up tonight’s game.

Stothers, on handling adversity for the first time this season:
Well it’s a good test. That’s what the season’s all about. And that’s exactly what we talked about after the game. It is our first test. Or our first taste, however you want to word it. So, you weather through it. Twenty guys that, you know what, when things are good, life’s great. It feels good to be a hockey player. When it’s not, you have the weight of the world on your shoulders. So, the good thing is we don’t have too long to think about it because we’re right back on the ice on Tuesday. We’ve got ourselves into this predicament so we’ll get ourselves out of it.

Stothers, on reflecting on the skid or thinking about having the Pacific lead still:
You always try to look at it from a positive end of things whether you’re winning or you’re not. We always try to improve ourselves and we prefer to look at the glass as half full rather than half empty. It’s pretty easy to let outside forces bring you down. Everybody wants to pat you on the back, everybody wants to hug you when you’re winning, everybody wants to kick you in the ass when you’re losing. You know what, we’ll stick together, that’s what good teams do. You know what, I’d be more concerned if our guys weren’t taking it as hard as they were or that they are. I’d be concerned if we were giving up 60 and 70 shots. They’re trying, but it’s just not going our way right now. We’ll just keep plugging away.

Stothers, on keeping the team from getting frustrated:
Well I just told them after the game, don’t think about what’s going wrong. Take tomorrow, we’re going to have a recovery day, and think about what you do well as an individual and as a team. You know what, we do a lot of things well. We’ve got a lot of guys who do things well. So if you go and take that day and rather than beat yourself up about it, just think about it. Hey, what do I do well? What’s my strengths? What do I do for this team? Hopefully you’ll be ready for Tuesday.

Stothers, on Dowd being double-shifted in third:
Well, again, you’re in a game where you’re one shot away from one goal behind and then you’re another shot away from tying it up. Maybe they take a high-sticking major and you get a five-minute power play. There’s all kinds of scenarios. You don’t leave the horses in the barn. You let them play. You open door and let them play. Again, we’ve got tomorrow off so he can rest up. He’ll be ready for Tuesday.

Stothers, on Charlotte’s power play:
You take that away and we’d still be playing. They capitalized on their power play so that was the difference. If you’re gonna win you’ve got to score more than zero. So, that will be continued to be worked on and we’ll get ready for Tuesday.

Stothers, on if he’d prefer the team play through slump or have practice time:
I think right now a day away is the best medicine for these guys. It’s been a pretty busy schedule since we’ve come back. It’s a short turnaround from last night to today and then we play again Tuesday. Practices are good. Practices are necessary. But also rest and recovery and time away from the rink is also good for these guys and you know what, they deserve a little time with their families, friends or just to recover. So that’s why we call it a recovery day.

Stothers, on if Budaj will be rested coming up for Houser to make debut:
I’m not sure why, but I guess I’ll consider it. I would spell Budaj with M-V-P, so at this point, not likely.

Nic Dowd, on the team facing adversity and how to battle through it:
I just think we stick to the course. Obviously missing some guys. We’re having difficulty putting the puck in the back of the net and our power play is definitely not kicking as it should. But, nothing to panic about. I think that’s the last thing we should do. Just keep getting pucks to the net and good things are eventually going to happen. You saw that last night 40-something shots and finally something started falling. I just think we need to continue with the game plan and after Tuesday’s game we’ll have a good week of practice, short week but good week.

Dowd, on practice vs. games during a slump:
You really have no choice. Every team goes through this, every player on an individual level goes through this. I think we have a very comparable group of guys in there that can turn this around. We lost last night and we lost tonight. So, we have another opportunity on Tuesday.

Sean Backman, on trying to carry over momentum from last night:
I don’t think our start was necessarily flat. I took the high-sticking penalty there and they scored on that. That’s always tough in the beginning of a game like that. We had some o-zone time but we weren’t getting pucks through. Pucks were getting blocked. We weren’t as crisp as we should have been. Some nights it’s going to go like that. (Reporter: Was the crispness factor something they were doing, or something you guys weren’t?) They weren’t doing anything that we hadn’t seen. We just need to execute more. Our lineup’s young right now but that’s not an excuse. We just have to be better.

Backman, on as a leader what he says to the group to turn it around:
When you go through slumps like this the only thing that gets you out of it is hard work. That’s what we have to do. We have to come back on Tuesday, be ready for the Stars and just outwork them. That’s what wins hockey games. Especially for a blue-collar group like we are, who isn’t manufacturing goals right now, we have to just work.

Vincent LoVerde, on the game overall:
I don’t know. They played us well. At the end of the day we’re having trouble scoring goals. I think that guys are gripping the sticks a little bit tight. It is what it is. It’s one of those things where we’ve kind of dug ourselves into this situation and we’re going to have to get us out of it.

LoVerde, on what he says to younger teammates on facing adversity:
It’s a long season. At the end of the day it’s three games. Do we want to go on a three-game skid? Obviously not. But it is what it is and the only way we’re going to get out is to work through it and figure out our issues and go from there. Obviously we’ve got some young guys on our team, some college guys used to shorten schedule and whatnot, but it is what it is. Just build off it and keep improving every day and come to the rink ready to work.