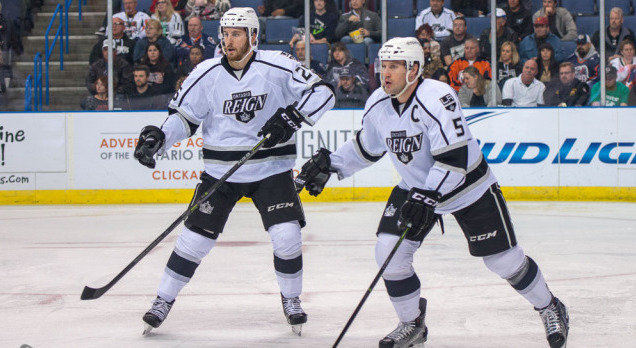 Reign game breakdown
Adversity is here for the first time this season for the Reign. Ontario’s scoring struggles continued on Sunday in a 2-0 loss on the second day of a back-to-back against the visiting Charlotte Checkers (19-11-1-1). It was the team’s third straight regulation loss, a first-time occurrence for the Reign (17-8-2-1). Two power play goals for Charlotte by Zach Boychuk in the first and Sergey Tolchinsky in the second provided the scoring. It was a mostly dull first two periods for the Reign, but they pressed in the third period with 13 shots on goal, but could not beat Charlotte goalie Daniel Altshuller. Altshuller’s first shutout marked just the second time Ontario has been held scoreless this season. Reign goalie Peter Budaj made his 14th straight start and stopped 19 shots in the losing effort.

Best quote
Reign captain Vincent LoVerde, on facing adversity: It’s a long season. At the end of the day it’s three games. Do we want to go on a three-game skid? Obviously not. But it is what it is and the only way we’re going to get out is to work through it and figure out our issues and go from there.

Three stars
–Zach Boychuk – Sean Backman took a tough high-sticking penalty in the offensive zone that set up Charlotte’s power play success, which started with Boychuk’s rebound goal at the 6:10 mark of the first period. After the Checkers had tired out the Reign’s penalty killers on a long, dangerous shift, Boychuk finally made the Reign pay by putting a rebound past Budaj at the side of the net.
–Sergey Tolchinsky – The Charlotte forward finished with two goals on the weekend and sent a laser high by Budaj in the second period of this one, a power play tally from just outside the left circle. It looked like Budaj may have been screened by his own defenseman Nick Ebert on the goal, but either way Tolchinsky’s speed stood out in both games of the back-to-back.
–Daniel Altshuller – The Charlotte goalie got Saturday night off after starting the five previous contests and looked refreshed Sunday afternoon in grabbing his first shutout of the season, making 25 saves. He wasn’t tested much in the first two periods, but he did have to stop the Reign’s impressive push in the final period including a great chance by recent addition Derek Army off a pass from Joel Lowry.

Turning point
–With 6:34 left in the third period a hard check by Lowry drew a cross-checking penalty out of retaliation to Charlotte’s Danny Biega. It was the Reign’s last best chance to get back into the game as they fought the clock. During that opportunity, Altshuller stopped a shot from the high slot from Nick Ebert and then laid back on the loose puck as Andrew Crescenzi crashed the net, preserving his shutout.

Stat fact
–4 – Shots on goal for the Reign in a sluggish first period of play, tying a season-worst for shots in one period. They also had just four in the third period of a 2-1 win over San Jose on Nov. 11.

This and that off-ice
Rookie defenseman Kurtis MacDermid served his fourth game of his 12-game suspension for his hit on the Gulls’ Matt Bailey on Dec. 26. … Veteran center Kris Newbury was out of the lineup for a second straight game with an undisclosed injury.

Next up
It’s a busy month for the Reign. They’ll they play their third game out of 14 on their January schedule when they host Texas for the first time this season on Tuesday at 7 p.m. PT. Ontario holds the edge this season, a 7-6 victory in Texas on Nov. 21.