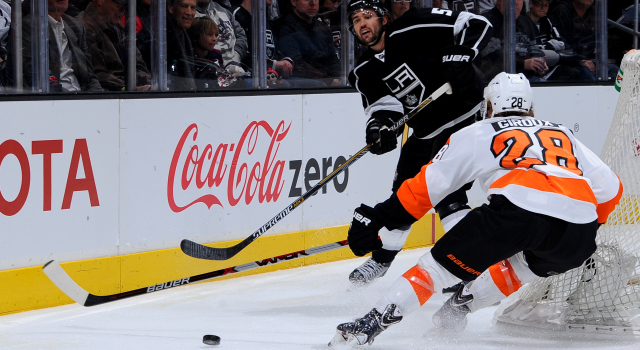 On whether the Kings had a strong first period and “sat back”:
No, not really. I think it was a good start against a fresh team. I said it yesterday. It was a little bit of a trap game for us because the team’s sitting here waiting, and we were in the middle of a stretch. Good first period, scored the first goal, scored a power play goal, which has been really important for us lately, and go from there.

On Dwight King providing production on the left side of the lineup:
I think our left side, Kinger was really good from Edmonton to Calgary, so the third game in a row.

On Jonathan Quick:
I think if you look at the top of the league, the number one guys that are on teams on the top of the goals against are all playing lots and don’t have much dip in their game, and he’s certainly been that. He knew since Christmas he was going to play every game for us.

On using Michael Mersch on the penalty kill:
We’ve been using him killing. It doesn’t have anything to do with late in the game, it’s more a lefthanded guy taking a few seconds off some other guys.

On having a wide lead on top of the Pacific Division:
It’s important – I’ve said it. It’s been asked. It got asked again on the road trip. Usually Anaheim’s running away with by now. I said it on the road. It does not change. We’re trying to be a playoff team. You don’t want to be fighting for the third spot. We tried it last year, and it doesn’t work.