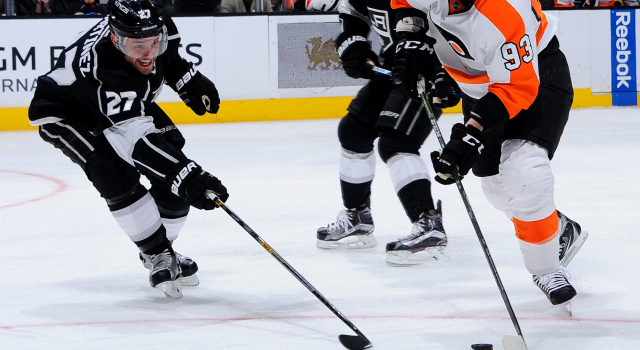 Dustin Brown, on Jonathan Quick’s performance:
It’s Quickie. They had a six-on-four there for the last minute or two, and he battled. I think there was a lot of traffic in front, and he found a way to get a piece of the puck. That’s the one thing about him, he’s always battling to try to see the puck so he can make a save, and he did that quite a bit at the end.

Brown, on the win:
I thought we were good in the first. We kind of drifted through it in the second and sat back in the third, so there are areas we need to improve on.

Brown, on not giving up much through the first period:
Holding on to it when we had it was one. I thought we did a pretty good job getting above their outlets coming out of their zone. They didn’t really have odd-man rushes until the third, and that’s something we’ve got to address.

Brown, on the forecheck:
I mean, that’s a big part of our game everyday. We’re a good offensive team. We’re getting ticks on the puck and turning the puck over on teams. That was a big part of our success on the road trip, too. Little ticks here and there, they add up and eventually you catch one where it doesn’t get all the way up and it ends up being in the back of their net, so it’s something we have to continue to do.

Alec Martinez, on limiting Philadelphia to one goal:
We had a couple real big defensive plays. I’m thinking two right off the bat with Dewey on two-on-ones towards the end. I think this was Quickie’s game. He battled us out big time. He made some huge saves in the second, and quite a few there in the flurry at the end. I think the one glove save might’ve been one of the best saves I’ve ever seen him make.

Martinez, on an afternoon game following the road trip:
I mean, the schedule’s the schedule. You can’t make excuses. Every team goes through the same thing. That was one thing we wanted to take a focus on coming back from the last road trip. We had a good start against San Jose and then ended up blowing the lead and losing a hockey game. That was one one of our focuses. I think we did some good things, but I think we’ve got a lot to sharpen up before we head to Denver.

Martinez, on whether he’s aware of the team’s wide lead atop the division:
Yeah, you’re always conscious of where you are in the standings. I think going into the last road trip in particular, when you are where you are in the standings, you want to really focus on your divisional games, and you want to create separation any time you can. Every game is huge, but really, at the end of the day, when you look at the schedule on the grand scheme of things, it’s divisional games that get you a spot in the playoffs.

Dwight King, on whether he feels comfortable after three games:
After the first game, for sure. Like I said, it helps playing with guys I’ve played with before, and just getting a little bit of work before coming back helped, too.

King, on whether he envisioned scoring twice in his first three games back:
Nope, I don’t think anybody really plans that kind of outcome, but I’ll take ‘em and hopefully just keep going.

King, on teaming with Marian Gaborik for a goal:
Yeah, he made a nice play, created a turnover, kind of bumped it over to me. When I got it, I had kind of seen Trevor on the far side. I think that’s what the goalie was anticipating, so I had a little more net than what it looked like to shoot at. He played the center of the net. [Reporter: Pretty good snipe, though.] Yeah, I had a couple weeks of practice, so I’m good there.