Waking up with the Kings: January 1 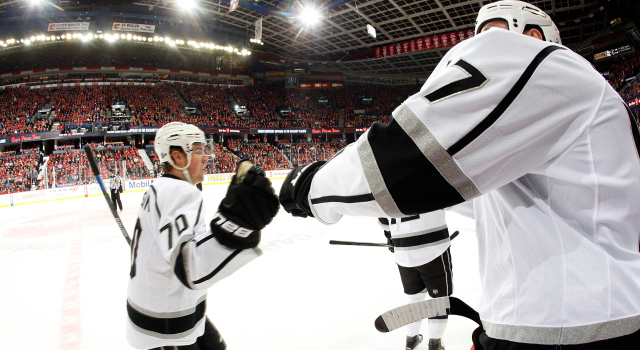 Happy New Year, Insiders! While Jonathan Quick backstopped a Kings team that got into a track meet against the Oilers in the first period on Tuesday before it ultimately struck four times in the second period and improved as the game evolved, Thursday’s game followed a different set of events as Los Angeles got on the scoreboard midway through the first period, pushed its lead to 3-0 by virtue of several dominating early second period shifts and then held on to dear life behind Quick in the third as score effects and a strong Calgary push meant that there were a few dicey moments, especially on the shifts after Mark Giordano’s goal, which included Joe Colborne hitting the goalpost. The end result was a 4-1 win to complete a four-game divisional swing that maintained the club’s grip on the division. With Jeff Carter out for all but 48 seconds of the trip – the center led the team in scoring when it left Los Angeles – 13 different players scored goals, and only Tyler Toffoli (four goals), Dustin Brown (two) and Tanner Pearson (two) scored more than one. The Kings have dealt with injuries all season long, but not to their leading scorer, and with 18 goals in four games, a committee comprised of contributions from all four lines lifted the club to its offensive heights. With 18 goals on 128 shots, Los Angeles shot 14.1% on the trip.

The possession metrics haven’t painted the prettiest of pictures for Andy Andreoff and those he’s played with most frequently this season– Andreoff, Jordan Nolan and Michael Mersch are the bottom three forwards on the team in Corsi-rel – but the group was good when aligned together during the road trip and combined for a goal for the second consecutive game when Nolan worked the puck behind the net before Mersch fed Andreoff in front for a quick finish. It is a very young line. Andreoff is most comfortable in a fourth line role, though he has versatility along the wings and can play up a line when pressed, and during a season in which the Kings became younger and needed to get more from its third and fourth line centers, Andreoff has shown development in a passable emergence. In his summer evaluation, I wrote, “If he’s able to make a leap from an 18-game body of work to a 60-something game body of work and shows improvement in his analytics and production while continuing to build his identity, it’ll be close to as positive of a season as could reasonably be expected,” and while the ability to drive play hasn’t yet come around, he’s developing a more pronounced role and showed some interesting moments when aligned with Mersch and Nolan on the trip.

Dating back to the road trip opener in Philadelphia on November 17, the Kings played 15 of 20 games on the road and finished the stretch with a 13-5-2 record. That’s excellent. Their reward? Getting right back to work for a Friday practice in advance of an afternoon game against Philadelphia on Saturday. There are 14 games between now and when the team leaves on its February Grammy Trip, and of those 14 games, 11 are in the Pacific Time Zone and three are in the Mountain Time Zone (two of which are in Glendale, Arizona). Nine of the next 14 will be at home, so the team will be tasked in maintaining its wide lead atop the division.