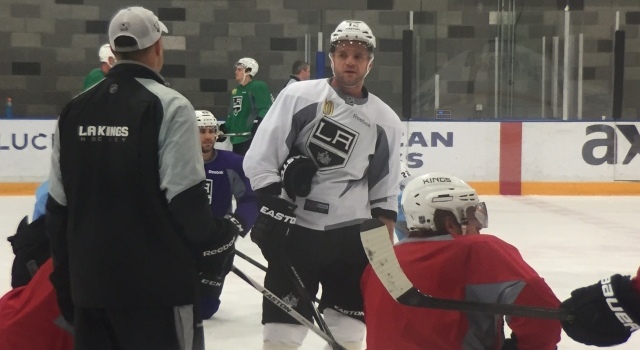 A very happy new year to you, Insiders. The Kings held a full practice at Toyota Sports Center on Friday only 10 hours after arriving at LAX and aligned as such up front:

-Stick tap to Jim Fox for confirming the forward lines after I had shown up a few minutes late.

-Don’t expect Jeff Carter to return to the lineup Saturday afternoon against Philadelphia (1:00 p.m. / FOX Sports West / KABC 790 / I Heart Radio). Asked how he was feeling after today’s practice, he replied, “Same, no changes.” Having turned 31 today, his birthday present from the coaching staff was a hard conditioning skate.

-Tomorrow’s game is an afternoon game, so the #LAKingsGoalieTweetOff applies. Jonathan Quick left the ice first and will be expected to start against Philly, though Jhonas Enroth didn’t exactly linger on the ice.

-The Flyers rang in the new year in Montecito, just outside of Santa Barbara:

The team stopped by for lunch with our founder and chairman Ed Snider at his Montecito, Calif., home today pic.twitter.com/sLjiawYZNl

They practiced in El Segundo prior to the Kings and are expected to welcome Chris VandeVelde and Michael Del Zotto back into the lineup. Vincent Lecavalier is expected to be scratched, per Sam Carchidi.