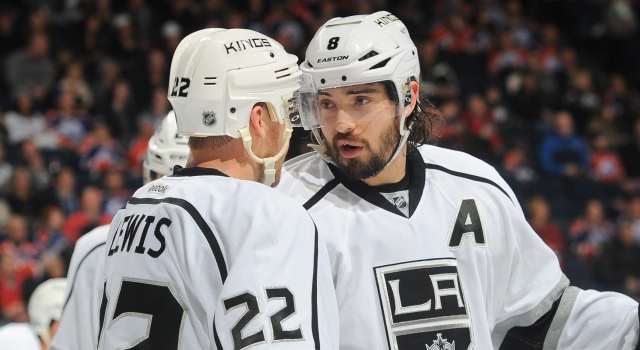 Drew Doughty, on the team’s confidence:
We’re a really confident team. No matter who’s out there on the ice, we’re confident that the job’s going to get done. Obviously some guys have played more than others, but we have full confidence in everyone. We feel like we have a great team here. We’re just going to continue to get better and better. Can’t relax for any moment even though we have this big lead right now. We have to get a bigger gap there.

Doughty, on younger defensemen assuming more responsibility:
I think Forbs has been great. He’s been playing really well since he’s been in the lineup. Brady’s taking on a bigger role on our team. He’s playing a lot more minutes, playing against the other team’s top guys every single night. I think he’s been playing great. He’s been awesome for me as a partner. I think Muzz has really taken a step this year, too. You maybe don’t notice it through his play, but he kind of controls his own D-pairing whereas before he had me to kind of control that pairing. I think he’s taken a big step and is doing great. From the forwards’ standpoint, a lot of guys are stepping up there, these young guys on the fourth line like Andreoff, Mersch, they’ve been playing great. They’re blocking shots, they’re scoring big goals for us. They scored a huge one for us last night, so I’m really happy with what we’ve got going on on our team right now.

On whether there is any different “feel” in the room, given the youth:
No, I don’t feel anything different. There are different guys obviously who are speaking up. Everyone always talks about those guys – their leadership and whatnot – and yeah, they were great leaders, but the guys that are leaders this year, they were kind of doing the same things last year, and I don’t know if it went unnoticed, but because you had those veteran guys, they maybe didn’t have to do it as much. Yeah, it’s too bad that those guys had to leave, but everyone’s stepped up, and everyone’s getting older and older, and the leadership comes from different guys, and the young guys are learning from then, and they’re going to start being the leaders one day, too.

On whether there is a new challenge with a lead in the division:
Yeah, it is. Obviously this has been our goal, to come in first place in our division every single year, and every year I’ve been here, we haven’t done it, obviously. Right now we’re being great, but like I said, we can’t get too comfortable, because right when you get comfortable, that’s when you start going backwards and you start losing games. We like the position we’re in, but we need to keep pushing, keep getting better every single night.