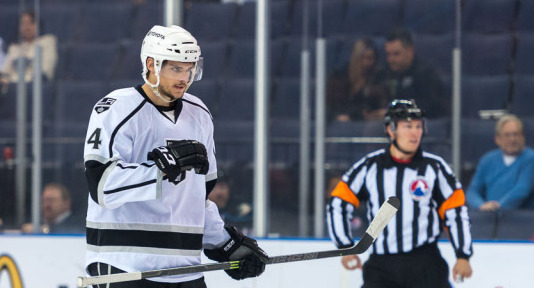 Head coach Mike Stothers, on the forced too many men calls late in the game:
Just eager to get on the ice, I guess.

Stothers, on the game being different than Tuesday’s matchup:
I thought we skated better the other night than we did tonight. I thought we looked a little sluggish in the first, maybe the travel back, get back at 4:30 in the morning, maybe that takes a toll on ya. It’s usually not the next day, it’s the following day, but not going to use that as an excuse. They played well. They played hard. They’ve found a way to get pucks by Buds, which is not an easy thing to do. We’ve got to find a way to put pucks past the opposition goalies.

Stothers, on if the fighting was a carry-over from Tuesday:
Well, I mean, it could be. Play teams back to back, kind of gets a little heated at times probably. Guys get a little angry.

Stothers, on the Reign’s trouble getting out of the zone:
We weren’t very good in our end at distributing and moving the puck and making the easy plays. I will admit that. Our defense had a tough first period and then as the game went on I thought they got better. We weren’t clean and we turned over a lot of pucks.

Stothers, on Stockton clogging up lanes in their D-zone:
I’d like to see us score more than 1 and 2 goals in a game. This 7-game segment, played five games, we’ve got eight goals. Makes it pretty tough to win. Somebody’s got to start finding the back of the net.

Stothers, on Heat goalie Ortio’s play and Reign’s lack of scoring:
He played well, but, you know what, Buds plays well too. You’ve got to find a way to score. You’ve got to truly go out there and believe that you can and will score. And when you get that opportunity you better bloody well be ready to put it in. So, put it in the back of the net. Don’t whiff on it, don’t miss the net, don’t have it jump over your stick. Be ready to score.

Stothers, on players jumping over the boards to force too many men calls:
Energy and emotion gets the better of ya, and, you know what, just excited to get on the ice. Get their minutes. Pad their minutes at the end of the night.

Stothers, on the penalty shot being awarded and if he’s seen that before:
No. Buds made a great save, as he always does.

Paul Bissonnette, on what happened late in the third with too many men calls:
Stuttsy’s a pretty passionate guy, and I don’t know, I don’t know what to say, probably have to ask Stuttsy, but maybe he wasn’t happy with the officiating and whatnot. Yeah, that was the first time I’ve seen that.

Bissonnette, on the refs overall:
They’re trying to do their job, they’re obviously seeing it the way they’re seeing it. Sometimes when guys are battling and calls aren’t going their way when they think they deserve it, it’s frustrating because we put the work in just like them. Either way, like I said, it’s human mistakes, it’s gonna happen.

Bissonnette, on the penalty shot being awarded:
I’ve never seen that. That was pretty nutty. Yeah. Me and Backs were looking at each other in the box like … It was crazy.

Bissonnette, on the game overall:
Kind of a weird game. They seemed to capitalize on a few. We came out flat in the first and it kind of bit us in the ass in the end. Normally, this year so far, we’ve done a good job of pushing late and either tying it up and squeaking points out and wins but it’s just a matter of time before it catches up to you.

Vincent LoVerde, on the calls late in the third and if he’s seen that before:
No, I don’t think I have. It’s just how the game went. One of those games.

LoVerde, on the game overall:
At the end of the day I think Stockton outplayed us. I think we came out flat all three periods to start the period and in this league if you do that you’re not going to win very many games. We had a good push at the end of the game there but in the end it’s not enough. You have to have that kind of push throughout the entire 60 minutes.

LoVerde, on how the team fixes that moving forward:
Just think we have to be ready from the drop of the puck. I think guys understand that, it’s just a matter of doing it.

Kevin Gravel, on the team looking flat at start of periods:
It’s just on us players. There’s no reason, there’s no excuse for it. Just got to be ready to go come puck drop at every period and tonight we weren’t. It’s inexcusable.