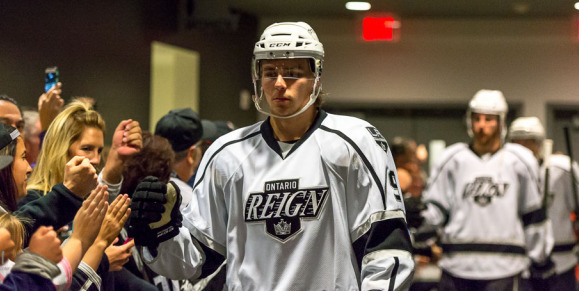 Reign forward Adrian Kempe scored his first goal at the World Junior Championships on Wednesday, which stood as the game-winner in Sweden’s 5-0 rout of Denmark.

Kempe scored in the first 13 seconds of play, pedaling from outside the Denmark blue line and into the zone, whistling a shot from the right circle to the opposite side high past Denmark goalie Thomas Lillie. For his efforts, Kempe was announced as Player of the Game.

With the victory Sweden improved to 3-0 in the preliminary round and is the only undefeated team Group A. They face Canada on Thursday in their final group play game, but both teams have secured spots in the next round.

If you’ve been following the tournament, you’ll know that Kempe exited Sweden’s opening game against Switzerland on Dec. 26 after a check from behind by Calvin Thurkauf. Kempe played in their next game against the United States, an impressive 1-0 win on Monday, but did not factor in on the scoresheet.

Kempe, the Kings’ first-round pick at No. 29 overall in the 2014 draft, has seven goals and nine assists in 21 games with the Reign this season and will return to the team at the conclusion of the tournament.