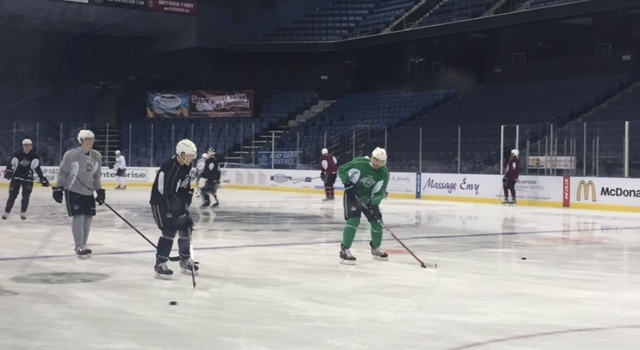 Buckle up. Lots of notes from today’s rare 1 p.m. practice at CBBA following a win and a long night of travel for the Reign back home to Ontario.

–A day removed from the hearing the news of his 12-game suspension for his hit on the Gulls’ Matt Bailey last Saturday, Reign defenseman Kurtis MacDermid provided his first comments on what happened. “It was just a hockey play and I was just trying to finish my check and that’s all I can really say about it,” said MacDermid, who practiced with the team but was the odd man out on certain drills. MacDermid received a match penalty for a check to the head on the hit that caused Bailey to suffer multiple facial/jaw fractures, according to TSN’s Darren Dreger. “We cannot be more clear that that was never the intent for anybody to be hurt and nobody likes to see any player hurt whether it’s your own team or the opposition,” Stothers said Wednesday. “Yeah, it’s a great rivalry between us and San Diego and it’s a great rivalry between all the teams that we have out here in California, but it’s never, on either side, there isn’t a point where you want to see someone hurt. It’s just playing hard. So it’s unfortunate and I know Derm’s upset that he injured somebody. So hopefully Bailey will recover from his injuries and be able to resume his career and I guess Kurtis will sit out his 12 games and hopefully be a little more aware of what he needs to do to play a hard, physical brand but make sure that it’s played with the respect that the league is looking for.” MacDermid didn’t travel with the team to Stockton as the Reign already received a memo that the play was under review and he had been suspended until further notice. Now, MacDermid is just trying to look forward: “Obviously it’s been tough, but there’s nothing I can do now except for work out and keep in shape and keep getting better every day.” Stothers, as a coach, is looking forward as well. “It’s a tough lesson and we’ll adhere to it and we’ll try to be better in schooling our players and making them aware of the opposition and when they’re vulnerable and hopefully it just makes for a better game,” he said.

–With MacDermid out of the lineup, we’ll be seeing a lot more of Zach Leslie, who prior to Tuesday’s game had dressed in just five. This is an opportunity for Leslie, but it does come at the cost of losing MacDermid. “Obviously you never want to see a teammate, friend suspended for 12 games like that, it’s something you don’t want to see, but it’s an opportunity for me to get a chance to step into the lineup on a day-to-day basis so that’s something I look forward to and I’m going to do everything I can to make the best of it,” Leslie said. Despite the short amount of games, the Ottawa native is confident that he’s done the work to be ready to step in and feels fresh. “The mental part and the physical part is kind of easy,” he said. “Stuttsy, they’re on us every day. It’s practice, repetitions and stuff like that that makes the game come a bit easier. Workout-wise it kind of gives you a bit more time to do more workouts, so you keep in just as good shape if not better shape than the guys who are playing because you’re not breaking down your body as much as when you’re playing games.” Leslie, a 6th-round pick by the Kings in 2013, credited Stothers and the high-tempo practices as one of the main reasons as to why he feels confident diving right in. Leslie jumped into Tuesday’s game and was paired with captain Vincent LoVerde, which is a whole new world for both blueliners. “That was really the first time we’ve ever been together,” Leslie said. “We hadn’t even had a chance to practice yet because we had just found out about Dermy’s suspension that day. It was new for us but it’s so easy, we’re kind of similar players in the style that we play. I think that makes it easier for each other because we know where we’re going to be and we kind of know the train of thought that each other has and we know if one of us is jumping into the play, someone has to stay back.” Wednesday was their first practice working together and there will be some expected adjusting since LoVerde has played all season with MacDermid. “There might be a small learning curve but at the end of the day you have to be able to adapt on the fly and play with different partners,” LoVerde said. “He’s a good puck-moving defenseman and it should be good playing with him.”

–Michael Mersch scored his first NHL goal with the Kings while the Reign were playing a game of their own in Stockton on Tuesday. “A few of us watched it in the locker room after the game,” LoVerde said. “Typical Merschy goal, taking it to the net and putting it five-hole. He’s one of my good buddies, I work out with him in the summer, so it was great to see that, very excited for him and Derek Forbort who scored the night before. Always good to see that and very happy for those two.” Stothers was certainly happy for his former left winger, who still leads the team with 12 goals. “I was shocked to see how he scored it,” Stothers said, sarcastically. “Takes the puck out of the corner and goes straight to the net front and just bangs and sure at first nobody knows if it’s in or not. It’s just typical Merschy. If you had to draw up what would be his first NHL goal, it would be something like that. But I did actually think he’d be laying on his stomach when he finally put it in the back of the net. It was a great week. Forby got his first goal and Merschy got his first NHL goal. That’s so exciting for those guys. It’s exciting for us. I hope that first one for Merschy is the first of 500.”

–The Reign are now down to six defensemen and when asked if there’s a chance they add another Stothers said, “We have talked about it.” Stothers pointed to “Swiss Army Knife” Paul Bissonnette as a candidate to move back, or any other forward on the team for that matter. “He’s a jack of all trades. He can play forward, he can play defense. We can throw him back there a in pinch, so there’s that,” Stothers said. “Knowing our group the way I do, there’d be a number of forwards who’d volunteer to play defense if we needed them to. They’d give it the old college try.”

–Kings prospect Alex Lintuniemi remains in Ontario after having wrist surgery and came on the ice toward the tail end of practice (wearing a red no-contact jersey) to get in some skating work with assistant coach Chris Hajt. Stothers said the defenseman’s been skating with the team sporadically as he’s recovering, but he’s limited to skating for now.

–Jonny Brodzinski provided all the Reign scoring in his first multi-goal game of the season in Tuesday’s 2-1 win over Stockton. The winger has seen his minutes increase in the absence of Mersch (with Kings) and Adrian Kempe (at World Juniors). I caught up with him after practice about how his game has changed throughout the course of his rookie season.

Brodzinski, on his growing confidence:
I think just overall handling the puck. Our line (with Jordan Samuels-Thomas and Andrew Crescenzi) as a whole has just been working really well together and I guess the confidence grows when you’re playing well as a group. With guys short with Kempe gone and Merschy being called up, it’s tough, but at the same time guys’ve got to step up and I think that’s what our line is doing right now and I think our whole team as a whole is right now.

Brodzinski, on if he takes pride in stepping in where there is an opportunity:
For sure. Just getting a little bit more minutes now, a little bit more power play time so it’s obviously a huge time to step up and be that guy.

Brodzinski, on how the game has slowed down and the feeling he had last night:
That was a big thing at the beginning of the year, I wanted to get four shots a game, 4-5 shots a game, that was kind of my goal. And I think these last couple of games I’ve been getting upwards of 6, 7, sometimes 8 shots in a game. The ability to find a way to get the puck to the net will obviously get you more opportunities, get your line more opportunities and you’ll score goals.