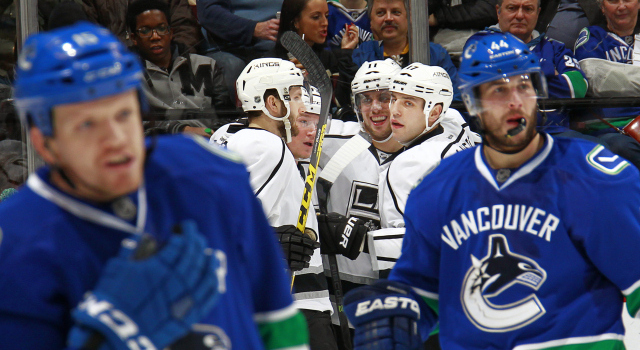 -Los Angeles’ defense was outstanding in the 5-0 win. McNabb finished an assist away from a Gordie Howe Hat Trick, Drew Doughty was Drew Doughty in a “scant” 26-plus minutes of work, and Jake Muzzin, who made excellent reads all night and tied up Sven Baertschi in the crease twice – including a stick tie-up that directly prevented a goal against – had one of his finest defensive performances of the season. And, hey, Derek Forbort scored his first career goal! That’s always a fun moment to see, and while the Kings are trying to balance Forbort’s development with the additional minutes and offensive proclivity inherent in Christian Ehrhoff’s presence in the lineup, it would appear as though Forbort has done enough to get a look for the third consecutive game. Of course, the opponent heavily influences the lineup Darryl Sutter wants to use, and with the hour lost in travel last night, Ehrhoff could very well return to the ice in Edmonton.

-As for the forwards, the Kings’ top players picked up the slack in Jeff Carter’s absence. Anze Kopitar tied a career high with four assists, won 23-of-28 faceoffs and was rewarded with reduced usage as the Kings sailed away towards victory, a huge benefit on the first night of a back-to-back set. After a month and a half of seeing his shooting percentage regress back towards worldly levels, Tyler Toffoli found the back of the net three times as part of a seven-shot effort and is now tied for seventh in the league with 17 goals on the season. His shooting percentage is back up to 17.7%, and that’s high, but not otherworldly unsustainable. There’s obviously a spike because he scored three times last night, but he’s on pace for 40 goals.

-More forwards: The top three offensive lines were all terrors last night and consistently worked the puck to high-tension areas in and around the slot. Andy Andreoff’s line was excellent – he led all centers with a plus-nine Corsi-for rating while at even strength – and given that Henrik Sedin entered the game dinged up, the team, even without Carter, still held a significant advantage down the middle of the ice. (See: Linden Vey took 17 faceoffs and was on the Canucks’ top power play unit.)

-The Canucks were an undermanned group last night, but from the opening faceoff the Kings set a tone of the way they wanted to play with several key pieces missing from their own lineup. Brayden McNabb’s hit on Henrik Sedin will be scrutinized, and if the Department of Player Safety issues any supplemental discipline, that’s fine. But, that would raise the question of why Victor Hedman got off scot free wrist after retaliating against Kyle Clifford by elbowing the Kings’ forward directly in the face, leading to an “upper-body” injury. Spiel over, moving on. 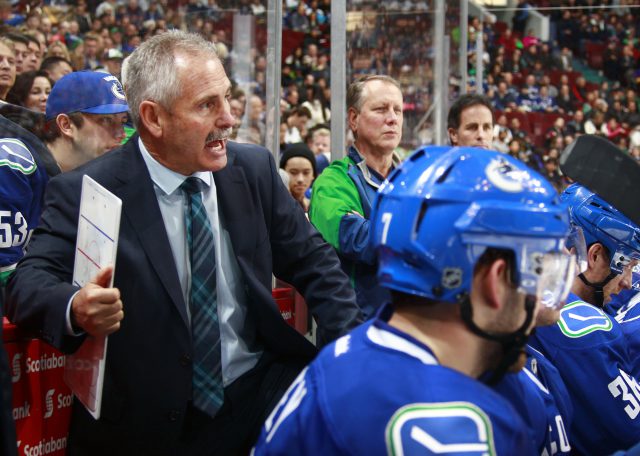