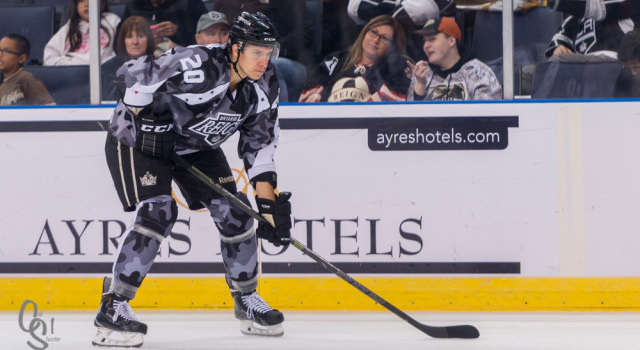 Reign defenseman Kurtis MacDermid has been suspended 12 games by the AHL for his hit on the Gulls’ Matt Bailey in last Saturday’s 4-1 loss.

MacDermid lined up Bailey as the winger was skating into the Reign zone and delivered a crushing blow at the near boards. As Bailey was down on the ice, Stu Bickel rushed in to his defense to fight MacDermid.

Here’s the video of the hit and ensuing altercation:

The Reign defenseman, listed as 6-foot-5, was assessed a 10-minute match penalty for a check to the head (Rule 48.5) and was removed from the game at the 8:04 mark of the third period.

Here is the explanation of the rule:

48.5 Match Penalty – The Referee, at his discretion, may assess a match penalty if, in his judgment, the player attempted to or deliberately injured his opponent with an illegal check to the head. If deemed appropriate, supplementary discipline can be applied by the President at his discretion (refer to Rule 28).

According to TSN’s Darren Dreger, Bailey has had surgery to repair multiple fractures in his face/jaw.

Reign head coach Mike Stothers recorded an audio statement via Joey Zakrzewski, the team’s Director of Communications and Broadcasting, following the ruling on Tuesday and called it “extremely harsh,” and “of proportions I’ve never quite heard of in the American Hockey League.”

“It’s not a pretty big hit, it was a huge hit. I guess the league has reviewed it and deemed it a suspension of proportions that I’ve never quite heard of in the American Hockey League. I think that’s more conducive to what would go on in junior. I’m hoping when the league reviewed it they were looking at it and reviewing it as MacDermid had a clean slate. I guess the biggest problem I had with it is there seemed to be a lot of innuendo that it was deemed direct hit to the head. Anybody that knows Kurtis MacDermid knows that he doesn’t play the game that way, he would never intentionally go out to injure somebody. But, yes he’s 6-foot-3, he’s 230 pounds, he plays a physical game. His game is very much patterned after Scott Stevens, who, correct me if I’m wrong, played the same way and had numerous hits the got him into the Hockey Hall of Fame, not a 12-game suspension. I know the game’s changed and certainly don’t want to see anybody injured in any situation, but I know that Kurtis would never intentionally go out to purposely try to injure somebody, nor would purposely try to target anybody’s head. I think it’s extremely harsh, it affects two careers. Certainly you’re hoping that Bailey will be able to recover and resume his career but now you’ve kind of painted and put a big target on MacDermid for playing the way he needs to play to make it to the NHL. What happens the next time he actually hits somebody and because he’s bigger, stronger, and it’s a hard hit, how long is that suspension? There’s lot of ways to look at it and we’ve had the luxury of looking at numerous other hits throughout the league this year and the suspensions that have gone along with it and there’s been a lot of one-games and three-games. So, I think that this one is harsh and it’s unfortunate for Kurtis. He’ll do the best he can to keep in shape and be ready for whenever he can get back into the lineup for us. … We’ll cross each day off on the calendar and make sure that he’s ready to play and resume and help his teammates.”

MacDermid, who plays alongside captain Vincent LoVerde, will miss his first game of the season tonight when the Reign travel to face Stockton. He has two goals and three assists through 24 games and leads the team in penalty minutes with 66. This is the Reign’s first suspension of the season.

MacDermid will be eligible to return to the Reign lineup on Jan. 23 of next year.