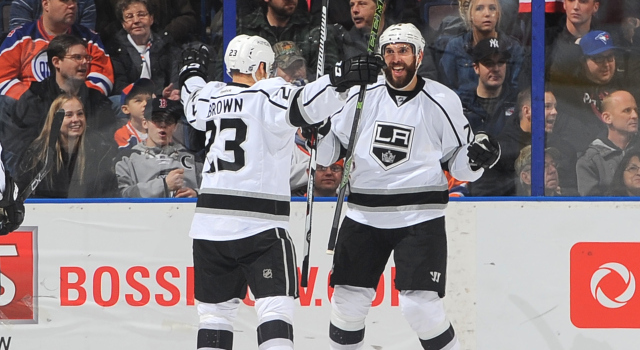 Dwight King, on how he has prepared to return to game action:
It’s been a process. Obviously at the start I didn’t do much. I kind of just did some exercises with Matt, our strength guy. Along the way, the further along I came, the more intense the workouts got. And the more pressure I could put on my foot kind of evolved that. The last couple weeks, I stated skating by myself while you guys were on the road. Then I had those two practices before the break and the last couple days here, I kind of [have been] getting a little more into it and the coaches kind of helped with that after practice. And then tonight, playing with two guys I’ve played with before helped a lot.

King, on what he liked about being on a line with Dustin Brown and Trevor Lewis:
I think we play to each other’s strengths. Probably a forechecking line is how you’d describe us and we’re hard on pucks. We were rewarded tonight for our opportunities which was nice to see, but I just like to compete and battle to get pucks and throw them to the net.

King, on whether it was weird to be in a game after getting hurt in preseason:
Yeah, it was. Warm-ups was a little weird, too. So it took me a little while. The first period was probably the toughest for me, and then kind of came along from there.

King, on whether he was emotional after scoring a goal in his first game back:
Not overly, I kind of pulled it out of the guys feet and I knew I had a little step and right when I was shooting I heard Lew call for it and he was in the high slot. But I had already kind of released it and it was more or less fortunate.

Mersch, on how it feels to score a goal in the NHL:
It’s awesome. You work your entire life, first, to get here and then when you score and it’s the way you’ve been scoring throughout your career. It shows that your game is able to be applicable to this level. Just little stuff like that. I’ve played, I think, nine games right now. I’ve been working hard and to see results is nice.

Mersch, on whether he feels like he’s developing good chemistry with Andy Andreoff:
Yeah, I think we’re both young guys and I think Jordan [Nolan] is helping us out a lot along the way because he’s been there and been through a lot of it. So just keep on working hard and going shift-by-shift and communicating with each other, which is huge. When you’re able to work in the offensive zone and sustain pressure there, it’s going to help a lot and you’re going to get opportunities. So we were able to do that in the second period tonight. Hopefully we can build on that.

Mersch, on whether he felt pressure to score after Derek Forbort scored the night before:
I wouldn’t say that. We’ve been roommates on the road for the last few road trips and we were teammates last year. But we’ve gotten a little bit closer now. So it’s fun and I was so happy for him to get his first last night, and then to get mine tonight. It’s kind of funny the way things work.