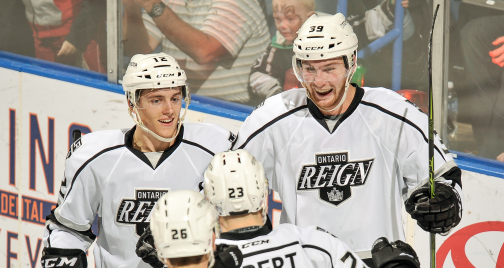 After every Reign away game we’ll try to catch up with Reign head coach Mike Stothers to get his take on things. Here’s what he had to say after Tuesday’s 2-1 win at the Stockton Heat.

Reign 2, Heat 1
Jonny Brodzinski scored both Ontario goals and Peter Budaj made 39 saves for his league-leading 16th win of the season as the Reign held on to beat the Heat.

Question: Budaj was tremendous, similar to his last game in Stockton. How important was he tonight?
Stothers: Budaj was very good tonight and was sharp all night long, especially when we needed a whistle. He ends plays when we have been extended in our zone and he keeps it moving when we are looking to head north. He has NHL experience and it shows in his reads and knowing the game as it unfolds in front of him.

Question: What about Brodzinski’s goals tonight, and how happy are you with his development as the season has gone on?
Stothers: Brods looked very comfortable and confident with the puck tonight. He held onto it and made plays. He led our team with seven shots and went to the net hard. His feet were moving and he looked like an experienced veteran instead of a rookie.

Question: Can you assess Zach Leslie’s play, especially coming into the lineup for MacDermid (suspended) after a long layoff between games?
Stothers: Leslie did a great job for us tonight. His attitude has been terrific and he is working hard on, and off the ice to make sure he is ready when called upon. It’s not easy to sit out, everyone wants to play and contribute. Les has become a real student by focusing on the detail of every drill in practice, and paying close attention during all our video sessions. He has become a good student and has remained a very positive teammate. He really skated and moved the puck well tonight. He was joining the rush and played a very solid game.