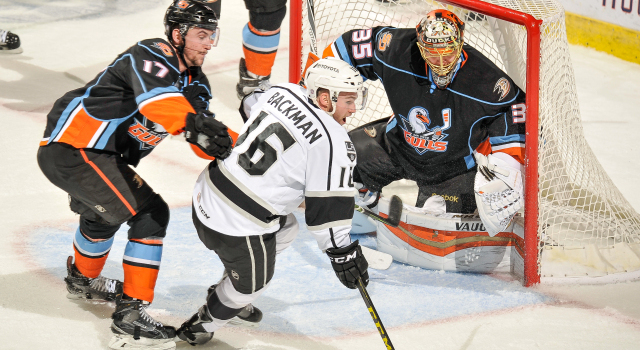 Reign game breakdown
The Reign (16-5-2-1) dropped their fourth straight game against the Gulls (15-10-0-1) in a 4-1 loss on Saturday night in San Diego. It was the first game off the holiday break for both teams and San Diego opened the scoring on a power play tally on a rebound goal by Nick Kerdiles 4:54 in. Justin Auger scored his 6th of the season to tie the game at 1, but the Gulls broke away in the second and third periods on goals by Chris Mueller and Mike Sgarbossa and added an empty-netter by Joseph Cramarossa to ice it. The Reign struggled on the power play, finishing 0-for-6, and ran into penalty trouble themselves, having to kill a five-minute 5-on-4 after Kurtis MacDermid was kicked out of the game for a check to the head on Matt Bailey. The rookie defenseman could see additional discipline from the league. Peter Budaj, between the pipes for his 10th straight contest, allowed three goals on 20 shots.

Three stars
–Anton Khudobin – The Gulls goalie has gone 3-0 in the AHL since being sent down by the Ducks and stopped 29 of 30 shots against the Reign. He made a breakaway save on Kris Newbury early and stayed in the game in the third period after taking a Kevin Gravel blast off his mask. He improved his GAA to 1.59 and his save percentage to .945.
–Chris Mueller – Mueller beat Budaj on what counted as the game-winner as he scooped up a rebound and deked out the Reign goalie for his fifth goal on the season. The rush started on a play down the right wing by Cramarossa and his rebound went to an unattended Mueller.
–Justin Auger – The 6-foot-7 Reign winger has stepped up his play in the absence of Michael Mersch, registering three goals in the last four games after scoring three through the first 20. Auger’s first period goal at the 10:03 mark to the right of Khudobin from a difficult angle was the Reign’s only tally and kept the team in a game where they were quite slow at the start.

Turning point
Ontario could not convert on a 4-minute power play in the middle of the second period with Shane O’Brien off for high-sticking Jonny Brodzinski. Looking back, it magnified their power play struggles, which reached an eye-opening 0-for-19 in the most recent three meetings against the Gulls dating back to a Nov. 28 loss.

Stat fact
–1/2 – Half of the Reign’s eight losses this season have come at the hands of the Gulls.

This and that off-ice
Michael Mersch was recalled by the Kings prior to their game against the Coyotes, as he had been sent back to the Reign as more of a cap-space-saving move earlier in the week. … Reign forward Adrian Kempe was talking to reporters and is reportedly OK after leaving Sweden’s opening game at the World Junior Championships in Finland. Kempe exited Sweden’s 8-3 win in the second period after taking a scary hit behind the net.

Next up
The Reign will play a mid-week road game, facing the Stockton Heat on Tuesday at 7 p.m. Ontario is 2-0 against the Flames’ affiliate this season.