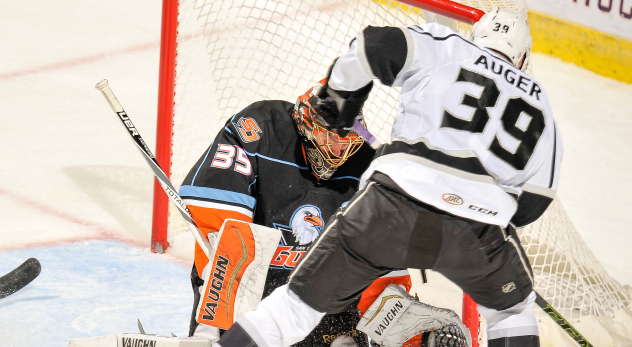 After every Reign away game we’ll try to catch up with Reign head coach Mike Stothers to get his take on things. Here’s what he had to say after Saturday’s 4-1 defeat at the Gulls coming off the holiday break.

Gulls 4, Reign, 1
Ontario fell in its fourth straight contest against the Ducks affiliate in a game where Justin Auger was its only goal scorer. The Gulls scored early (Nick Kerdiles) and late (Mike Sgarbossa) and Chris Mueller picked up the game-winner to supplement Anton Khudobin’s 29 saves for his third win. The Reign went 0-for-6 on the man advantage and are 0-for-19 in their last three meetings with San Diego.

Question: What is it about SD that they seem to have your number this year?
Stothers: Not sure I would word it that they have our number. We haven’t even reached the halfway point in games vs each other. What I will say is we have to score more than the one or two goals against a good hockey team. We played well at times but did not capitalize on our chances and they did on our mistakes.

Question: Fair enough on that. Do you look at the power play not capitalizing or 5-on-5 play? Seemed like when they got the double-minor call that that would have been a good time to get rolling.
Stothers: I look at the whole picture and we need to capitalize more on opportunities that present themselves in all situations. The four-minute power play was one of those for sure but you can’t expect to win if you just wait for power plays. Scoring should be shared equally in all areas and by each and every guy dressed. How about tossing in a shorty, or tipping a point shot, or banging home a rebound, or just making sure the shot gets thru, and hits the net, instead of scraping the ceiling with your wind up and blasting it wide or into shin pads?

Question: Curious also what you thought of the MacDermid penalty and what you saw on the hit.
Stothers: Doesn’t matter what I think. The referees deemed it a five-minute major. You never want to see a player injured on any hit, whether it’s your own player, or the opposition. Dermy plays hard but never would intentionally try to hurt anyone. Hopefully Bailey is OK.

Question: Do you have an update on Bissonnette and what happened to him last game?
Stothters: Biss is like an antique car, it looks great in the garage, but as soon as it hits the open road, it’s headed straight to the shop. I say that in jest, because he is such a good, character guy. He is a big part of our team, the intangibles he bring to the room, and the ice. He is a little snake bit with the injury bug right now but he is working hard to get healthy soon.