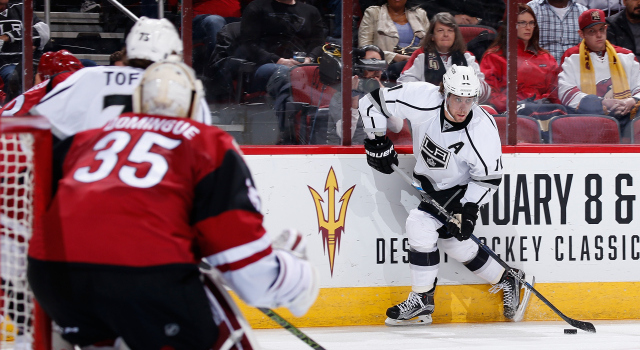 Anze Kopitar, on how he read the play on his game-winning goal:
I saw that it was a forward on the backend and then I saw he stumbled just a little bit and I just wanted to make sure I got around him and then saw the pokecheck coming and just wanted to make sure I got around. From then on, I wanted to bear down and just really put it in there because it’s overtime. The ice is not the greatest out there, but it was good that it went in.

Kopitar, on the team’s approach heading into the third period:
Well, first and foremost, we just wanted to stick to our game plan and stick to our game because we were down 1-0 in Toronto and then it kind of spiraled on us after that. [We] just went out there, got a few power play chances, capitalized on a few, and then got into some penalty trouble. They came back. They obviously have some skill, or a lot of skill, and they made us pay on their power play. But it’s nice to get the two points, that’s for sure.

Jake Muzzin, on Darryl Sutter calling his collision with Boyd Gordon a “hockey play”:
Yeah, I obviously didn’t mean to hit him in the head or anything like that. I was just going to keep the puck in and he kind of went down low and my [backside] caught him in the face.

Muzzin, on how the team remained focused in an eventful game:
Yeah, we knew we had to gut check and get out there and have a good third and we did that tonight. We got some power play goals and that was huge for us.

Muzzin, on whether his lack of league discipline will affect any league decision:
Well, we’ll see. Whatever they’ve got to do, they’ve got to do. But I didn’t go and intentionally hit him in the head. I think you can see it, but like I didn’t know, obviously, that he was going to drop and take a knee like that. But it is what it is.