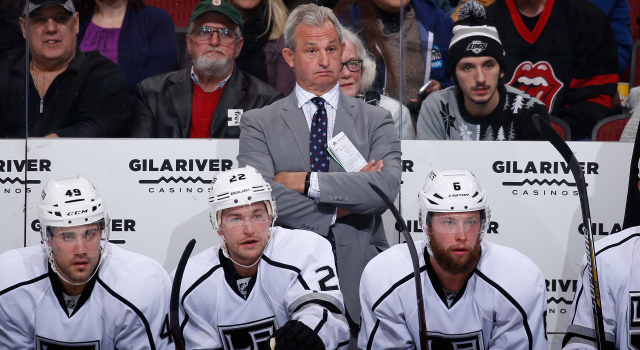 On what he saw on Jake Muzzin’s match penalty:
Muzz’s ass on Boyd’s face. It was a hockey play. It’s not even a penalty. They had their arms up the whole night. It was all penalties. All special teams.

On the challenges in finding a rhythm in the game:
Actually, it was an exciting game. We were down a forward right away, they were playing with 11 forwards, so nobody could bitch much about ice time.

On the team’s resilience in the win:
The Toronto game we were one-nothing going into the third, and they scored the second goal, and we had to change our game, so it was the same tonight. It was one-nothing, same score going into the third. You had to win the third period. Did that. [Reporter: And the overtime.] It was a great play by Kopi. Actually, Tyler, they both made really good plays – Tyler just before that missed the net – and when you think of three-on-three and you miss the net on a good chance, it usually goes the other way. We were able to get it back again.

On the team being in “control” prior to the Muzzin major:
Well, as I said, it’s three-one, and I totally disagree with the call. It’s not even a penalty. It shouldn’t even be a minor penalty, but obviously Marty shoots it out, so that’s five-on-three.

On the team’s focus after two periods:
Win the third period. Pretty simple.