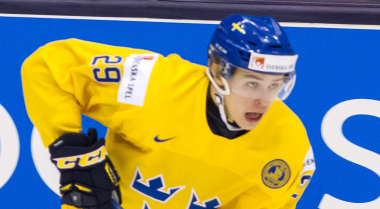 Reign forward Adrian Kempe left Sweden’s opening game on Saturday at the World Junior Championships in Finland after being injured during the second period against Switzerland.

Kempe was crushed by Switzerland’s Calvin Thurkauf behind the Swiss net, which looked like a retaliatory hit after Kempe had muscled Roger Karrer in a race for the puck.

Here’s a video of the play:

Uffe Bodin, Editor in Chief of hockeysverige.se, tweeted after the game in was what translated to English as, “Good news from Adrian Kempe. He is doing fine and expects the game against the United States. #jvm16”

Thurkauf was not penalized on the play, which happened with just under 9 minutes left in the second period. Kempe was helped off the ice and headed to the locker room shortly after. He was seen on the NHL Network broadcast out of his equipment and watching the game in the tunnel.

That was a positive sign, considering another star for the team, Maple Leafs prospect William Nylander, was knocked out of the game on a check to the head by Chris Egli in the first period and was not seen again on the broadcast. Egli received a game misconduct and a checking to the head and neck area penalty for the blow.

Kempe, 19, left the Reign to join Sweden for the tournament after scoring 7 goals and 9 assists through 21 AHL games this season.

Sweden went on for an expected easy 8-3 win. Before leaving the game, Kempe had an assisted on the Swedes’ second goal by Oskar Lindblom.