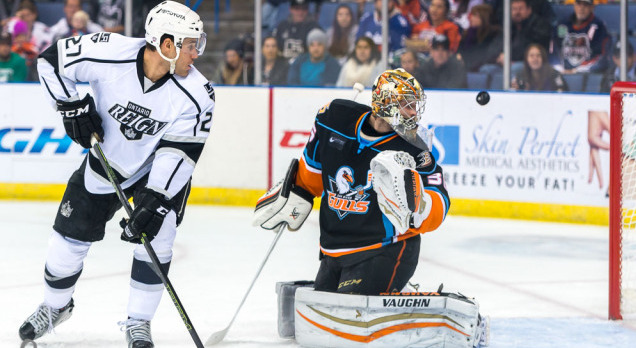 The Reign are off this week (Happy Holidays, everyone!) and will resume action on Saturday in San Diego, which will also mark the expected return of left winger Michael Mersch.

The 23-year-old was sent back to the Reign on Wednesday, signaling the end of his call-up with the Kings in which he made his NHL debut on Dec. 11 against Pittsburgh and played in six total games. With the big club, Mersch averaged over 10 minutes of ice time, had 7 shots on goal and was a minus-2.

The Reign went 3-0-0-1 (two of those being OT wins) without his services and averaged 2.25 goals per game. Ontario averaged 3 goals per game with him, so they weren’t much off the normal scoring pace (plus you do have to factor in that they were without Adrian Kempe for two of those four games as well).

Perhaps the biggest change was we got to see Nic Dowd centering someone other than Mersch. Dowd played with Kempe, Jonny Brodzinski and Justin Auger mostly but other wingers during times of line combo mix-ups.

Tracking Kempe at WJC
For those interested and those who will wake up early the day after Christmas, you can catch Kempe in action at 6:30 a.m. PT playing for Team Sweden as they take on the Swiss in their opening game of the World Junior Championships in Finland. The game will broadcast live in the States on NHL Network and you can find the TV schedule here and keep tabs on the WJC here. (I suppose if you don’t want to wake up early, you can always set your DVR.)

The experienced Sweden team is considered a favorite in the tournament and nearly came from behind to beat Canada in a 7-6 loss in pre-tournament action on Wednesday, a game in which Kempe scored (Make sure you click on that link). Hopefully someone fixes the nets before the official games begin! Kempe wears No. 29 for Sweden and his goal is featured at the 2:08 mark of the highlight video in the recap.

Reign (podcast) update
I joined Jesse Cohen from the All The Kings Men podcast to talk about last weekend’s games and what’s ahead for the team. You can listen to it here.