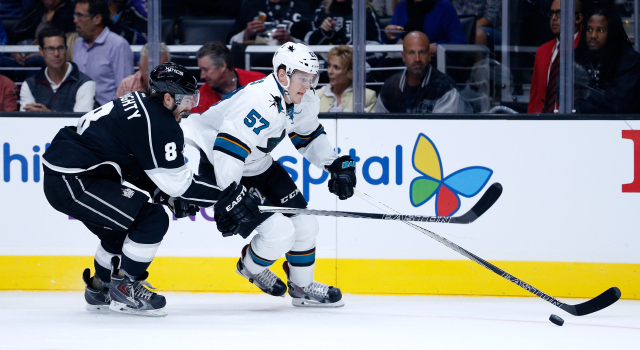 The Pacific Division is a funny place. There are the Los Angeles Kings, who have commandeered first place in the division and lead second-place San Jose by eight points with a game in hand. The Sharks, who will face the Kings tonight at Staples Center (7:30 p.m. / NBCSN / KABC 790 / I Heart Radio) in the final game before the Christmas break, are only five points up on last place Anaheim, a popular pre-season Stanley Cup pick. Calgary, a playoff team from a season ago and recently the engineers of a seven-game winning streak, is two points out of a playoff spot with two games in hand on third-place Vancouver despite a league-worst minus-25 goal differential. Barring any extended hot streaks, it appears to be a safe bet with anywhere between 50 to 47 games to play that the division will produce only three playoff teams, and that the highly competitive Central Division will earn both Wild Card spots.

And that’s what makes tonight’s game so interesting. If Los Angeles wins, they’re 10 points up on the second place team with a comfortable divisional cushion. If San Jose earns a road win – they’re 12-6-2 away from the SAP Center this year – they’re six points behind the Kings and will be ready for an infusion of momentum when Logan Couture is expected to return shortly after the new year.

“We’re going to crawl in fightin’ ‘til the middle of April, if you want to be a playoff team,” Darryl Sutter said earlier today.

For Los Angeles, this home game bridges an Eastern Conference-heavy portion of the schedule and a four-game road trip through divisional foes in Arizona, Vancouver, Edmonton and Calgary.

“Because it’s one game and then a three-day break, it’s not ‘opponents,’ it’s just an opponent that happen to be a division game,” Sutter said of how the schedule is broken up. “The biggest thing for us is we haven’t played many games at home [recently], nor will we, so it’s important that we get a good effort tonight.”

Thus far, the Kings are 4-4-0 against Pacific Division opponents.

“I don’t know if there’s any different feel,” Doughty said of facing divisional rivals after an Eastern Conference-heavy schedule in which Los Angeles went 5-2-1.

“Playing a division opponent, you’ve got to be up a little more for those games – not that you’re not up for every game – but you’ve definitely got to pay a little more attention to it. You’re going to probably expect a little more of a physical battle than the Eastern teams. On that Eastern trip, you don’t really get touched as much as you do when you play a Western Conference team. We expect to be banged a lot tonight.”

Drew Doughty, on the team’s recent play:
We’re playing well. We’re happy with the position we’re on, obviously, being in first place in our division, but we need to continue to create more breathing room between first and second place, and that’s what we’re looking to do.

Doughty, on whether he’s surprise by Anaheim’s place in the standings:
I’m a little surprised that they aren’t doing as I kind of would’ve thought. Typically, our division is probably one of the tougher ones, and right now, this year, it doesn’t seem that way, but every single time we play a divisional opponent, they’re looking to beat us, obviously. They’ve been tough for us this year, so we need to start paying extra attention to division games and winning more of those.

Doughty, on where improvements could take place:
I think a lot of games that we’ve lost, especially lately, I think we could’ve scored a couple goals on some of the scoring chances we’ve had, because we’ve had some really good scoring chances and no put the puck in the net, so I think a lot of times, those big goals can change the momentum of a game, and if we’d gotten those big goals at those times, the last few games, I think it would’ve made a difference in the game.

Doughty, on what Milan Lucic has brought:
He’s been great. Looch has been awesome moth on and off the ice. Everyone here loves him. He fits in with our team great. He brings a lot of energy to our team, obviously a physical force, and then he’s a really good hockey player and he helps our team a lot. He helps make other players around him better, too. [Reporter: Did you know him at all before he came over?] Yeah, I knew him a little bit. We played Canada-Russia series together for eight games one time, and then we played at the Olympic camps together, so I know him from there too, so I’ve known Looch for a long time. I was really happy to have him. [Reporter: He fit in fast, didn’t he?] Yeah, it’s not hard to fit in with this group, though. We have a great group of guys here. No matter who comes in that’s a new guy, I think every time you’re going to hear that guy say we have a great group of guys here and they’re happy to be here. He fit in really fast, and we kind of expected that. We know Looch is an awesome guy, and that’s what we’ve built ourselves around, is having good guys in this locker room and being a family in this here, and that’s what we do.

Doughty, on whether he relishes nationally televised games against rivals:
I didn’t even know it was on national TV. It’s a big game for us, especially going into the Christmas break. What better to end it off with a big win here against a division rival of ours? It’s a team that we don’t really like too much. It’s a team that we love to play and love to beat obviously. Yeah, for me, I need to step up and have a big game tonight.

Doughty, on whether the team was left with a “sour taste” after the loss in Toronto:
Yeah, we were hanging around when it was two-nothing, and we easily could’ve gotten back in that game with a big goal, but once you let teams kind of just hang on to their lead for too long, then that’s how it starts to go.

Doughty, on whether there’s comfort with a heavy lead in the division:
I don’t think we want to be too comfortable. We’re happy with where we are, but we need to continue to make that gap bigger from first to second. We need to continue to put more and more points on the board. We can’t sit back for one second and take it easy and think we’ve got some room to breathe, we can relax. We need to keep going and keep winning games and make that gap bigger.