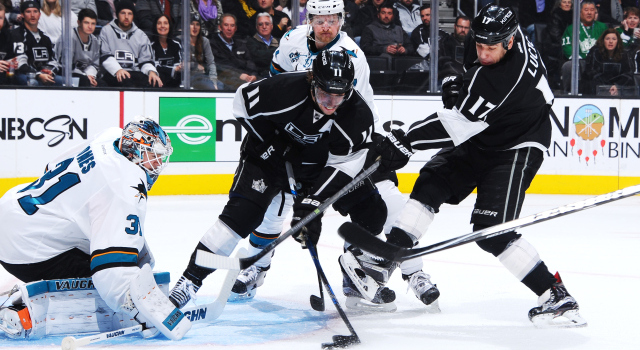 On whether he looks at four goals against, or whether it’s more complicated:
No, I’d say that. Goals that just found their way to the back of the net and through our goalie.

On what San Jose did differently as the game elapsed:
I don’t think much different. I think that the Toffoli goal late in the second should’ve been enough, and to give that goal up right away on a bad play along the boards – we’re not getting cover along the boards – to make it three two was in the end the difference. It’s way better having a two-goal lead than a one-goal lead when you’ve jammed a lot of games in and getting a lot of travel. Reporter: Gave ‘em life because the goal was scored so quickly after you scored your third one there?] Yeah.

On the two quick third period penalties:
Well, Christian’s got to play the man, play the body there, and he’s sort of ducking down. They’re going to call it sometimes, sometimes they’re not. But the next one is a bad call. It’s not a penalty, but at the same time, we get half of that penalty killed and give the puck right back to Thornton. I’m sure if you look at the score sheet, you’re going to see Pavelski, Thornton, Burns. So, big guys versus big guys.

On what needs to change with one win in five games:
I don’t really look at it like that. If you want to be critical or negative, go ahead. I don’t think that’s the case. As I said when Jon asked at the start about goals against, we’d given up four plus the empty netter tonight, and the last two that we lost on the road, they were both fives. So you ain’t going to win no games. None.