King nears a return; time off was “difficult mentally” 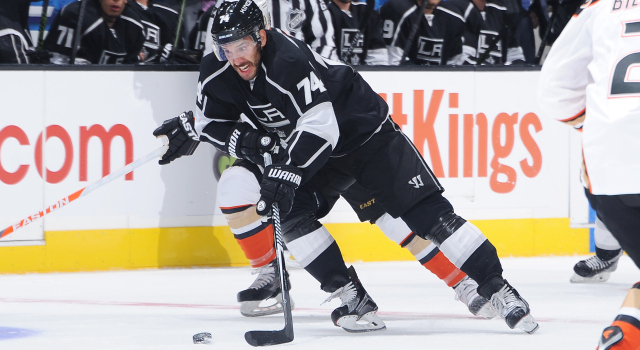 Good news: Dwight King skated with the Kings on Monday, taking part in his first full-team practice since suffering a broken foot that required surgery while blocking a shot in the team’s preseason finale on October 3.

Not as good news, but still encouraging: King isn’t expected back in the calendar year 2015, Darryl Sutter said.

Good and wholesome news: Because King hasn’t been traveling, he was able to take in his daughter’s preschool Christmas recital.

So, that’s more or less it, from a blog gratuitously tossing colons out today: Dwight King is skating with the team. He’s cleared to take part in practices, but not games, and Darryl Sutter told reporters, “don’t expect him in 2015.”

“This is kind of just a process thing,” King said. “I got cleared today to practice with the guys, so I’ll be doing that for at least these two days heading into the break, and then I think we’ll reevaluate after that and see where it goes.”

This current hiatus is the longest break King has taken from playing regularly in his professional career. Since graduating from major junior hockey, the 26-year-old appeared in 2010 and 2011 playoff runs with AHL-Manchester prior to graduating to the Kings, where he won a Stanley Cup in 2012, logged games in Manchester during the 2012-13 work stoppage before playing deep into the spring once again in Los Angeles. He won another Stanley Cup in 2014, and after his 2014-15 season ended in April, appeared in all of four preseason games before suffering his foot injury.

“It is difficult mentally,” he said. “It was almost like an eight-month summer for me with a short training camp and then having two and a half months to get back into shape, that sort of thing. Mentally, it’s a little tougher than physically. Obviously everybody’s used to preparing themselves to play, so that part was OK, but now I’m finally drawng in on coming into the end, which is exciting.”

Dwight King, on having missed extensive time:
Yeah, it’s tough to watch, but as long as they’re doing well – the boys are playing well, winning games – that’s exciting to see. That’s what you want as a teammate. It’s been good and bad. Obviously a little frustrating with not being able to skate for that long, but I think last week helped me leading into today, so it was nice.

King, on skating with Trevor Lewis and Nelson Emerson last week:
Yeah, I skated with Trevor twice. He skated twice before he joined you guys on the trip. That helped, a little bit of passing, and then the last couple of days were just by myself. Long days, but it was all right.

King, on his first practice with the team since the preseason:
I got a little better as it went on. The timing of making passes and getting open was an adjustment at the start, but overall I think we’ve done the same drills for the last five years, so it makes it a little easier.

King, on whether he is fully cleared:
Technically, I wouldn’t be able to play a game. I’m practice-cleared.

King, on whether he’d need a conditioning game in Ontario:
That’s up to the coaches, I guess. Hopefully these practices help with timing and everything like that. Obviously a game is different, but I’ll play wherever they tell me to play.

King, on the timetable of his injury:
I got told 10-to-12 weeks. I think it’s week 11 tomorrow, so it was pretty close to what the doctors said, and now it’s obviously one more check-up and conditioning, which should be all right.

King, on any current discomfort:
When I tried to skate two weeks ago … it was discomfort then. I think this last week helped with the swelling, and today I didn’t have any issues at all, so it was good.